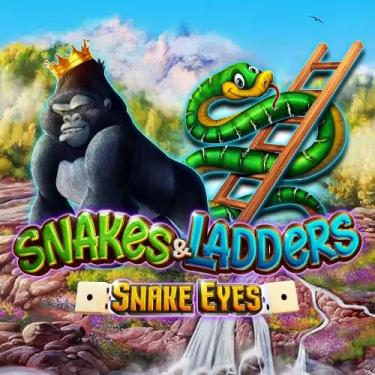 Pragmatic Play and Reel Kingdom released Snakes & Ladders Snake Eyes as the second title in their Snakes & Ladders series. It’s easy to see why! The board game influence in slots is such a charming and effective mechanic that it would be a crime to not see more of it. So strap on and get ready for the most intense Snake & Ladder experience of your life!

Don’t expect to see a board game layout right away! Snakes & Ladders Snake Eye has a fairly traditional slot layout in its base game: 5 reels, 3 rows, and 10 paylines. In addition, the slot has a 96.08% RTP and 5,300x max win. And although you may be familiar with the concept of ‘snakes and ladders’ since your childhood, this is no child’s game as the volatility level is maxed out at 5/5.

Aside from the low-paying symbols, there are also baskets, snakes, bananas, and gorillas as the premium ones. The highest-paying line players can get is a full line of gorillas for 50x the bet. There is one special feature in the base game called Wild Dice symbols: they function like normal Wilds, but whenever they land they will reveal a dice face that represents a 1x to 3x multiplier.

Land 3 - 5 Scatters to enter the bonus game with 12, 14, or 16 dice rolls respectively. The reels now get replaced by a 12x12 board with 144 squares. The player will be represented by a Gorilla token and each dice roll moves the token up to 6 steps forward. Whichever square the token lands on, you earn the reward/consequence of that square, including:​

Sometimes you may find yourself landing in a bunch of empty spaces that don’t win anything but don’t worry though as the game has 2 features to help with such situations. If you win less than 20x by the end, the Rage Mode is triggered and the Gorilla token moves to the end of the board while collecting all values and multipliers in its way. Finally, once the dice rolls run out, you have a chance to retrigger the bonus by rolling 2 dice. If they have the same value (1:1, 2:2, 3:3...) the bonus is played again with the same number of starting rolls.

Snakes & Ladders Snake Eyes is such a throwback to some more simple times. The bonus game is awesome even though it can be confusing at first. In all honesty, the base game is quite uneventful but you can’t really ask too much from a base game. Overall though, this game is always a refreshing experience after spinning many similar slots in a row.