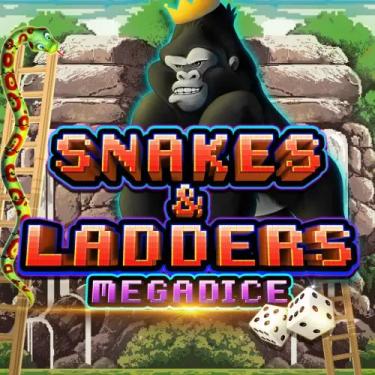 Snakes and Ladders Megadice from Pragmatic Play may contain seemingly outdated graphics but don't be fooled, it's a very intentional visual choice. The slot takes major influence from the classic board game of the same name but it doesn't rely on nostalgia as the sole selling point. Instead, the game introduces one of the most unconventional and fun bonus rounds ever.

At first glance, Snakes and Ladders Megadice presents itself in the standard 5x3 grid, but this slot game is anything but standard. With an RTP of 96.68%, max win of 5,300x and high volatility, the game comes with a myriad of special features.

First, the wild symbol is a dice carrying either 1, 2 or 3 dots, which give a multiplier of 1x, 2x or 3x to the total win of that spin. The dots on wild dice symbols have another function as well - triggering the Snakes and Ladders board bonus. There's a snake with 12 sections on top of the reel, and each wild dice symbol that hits will activate the sections correlated to the number of dots on it. When all 12 sections are activated, players enter the bonus game. In addition, if you overfill the snakes, those extra dots become extra bonus spins.

The free spins feature starts with 12 spins plus however many extra dots you have, but that's not the only way to enter the bonus round. Players can also collect 3, 4 or 5 bonus symbols, granting 12, 14 or 16 free spins respectively.

In the bonus game, the reels transform into a 12x12 snakes and ladders board game, with the player represented by a gorilla head token. As a result, free spins are actually dice rolls with 2 dice, and the total value of them dictates how many squares the player token moves on the board.

Each square is either empty or contains one of the following prize:​

If the player token has reached the last square of the board and you still have dice rolls left, you can roll two dice once and if the result is a double (1-1, 2-2, 3-3...) the bonus round is retriggered. Moreover, if you run out of dice rolls and the total winning is less than 20x the stakes, Rage Mode is triggered: basically, the player token will move along to the final square and eat up all the prizes on the way.

Snakes and Ladders Megadice is a fusion of slot and board games and it definitely offers a more creative approach to slot grid and gameplay. Still, not gonna lie, I’m not the biggest fan of the game but I do have to say - it can pay! Also, hats off to Pragmatic for trying something new and unusual. That’s the only way we can push the industry needle in the right direction and improve the gaming environment.