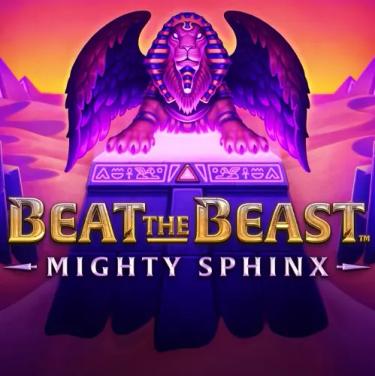 Beat the Beast: Mighty Sphinx is the second installation in the Beat the Beast series of slot games from Thunderkick. More often than not, people try to make the sequel big and grand, but Mighty Sphinx is actually a more toned-down version of the original. For those who love the lore of ancient Egypt, this slot is a must try.

Although the background for Beat the Beast: Mighty Sphinx is a beautiful Egyptian dessert drenched in golden sunset, players will soon notice that the reel structure remains unchanged. We still have 5 reels and 3 rows with 9 paylines. The slot is highly volatile, but players can bet as low as $0.1 or high as $100.

With an RTP of 96.14%, Beat the Beast: Might Sphinx is very much up to the industry's standard, and you can expect a max win up to 4,444x the stake. One way to get a big reward in the base game is to land 5 winged Sphinx symbols in a line, which pays 250x the bet. Another symbol to look for is the Sphinx Emblem symbol, acting as both scatter and wild symbol.

In the base game, there's the Mystery feature: which randomly places up to 3 Sphinx Emblem symbols on any reel at the beginning of a spin. Three or more Sphinx Emblems also take players into the bonus game with 10 free spins to start. Plus every time you get 3+ scatter symbols again, 5 more bonus spins are added.

There are 2 special features in the free spins round that help players net bigger wins. First, at the start of each free spin, 1 to 3 wild symbols are randomly placed on the reel. What's more, if you manage to retrigger the bonus round, one mid pay symbol will transform into wilds.

Mighty Sphinx is one of the best slots in the Beat the Beast series. From graphics to gameplay, it blows Cerberus's Inferno out of the water. The game is not inundated with features, but every feature that exists elevates the gameplay. I love the fact that there are layers to the bonus game, and when you land the wild upgrade feature, the whole reels can be full of wilds - it's a beautiful sight to see. If there's one thing to fault Beat the Beast: Mighty Sphinx, it's the fact that it has a lower winning potential than the original Kraken's Lair slot (4,444x compared to 7,777x).