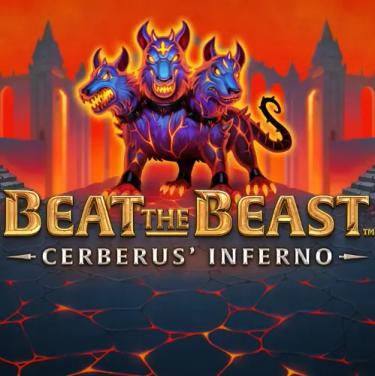 Thunderkick brings us another installment of Beat the Beast slots, and this time the monster in play is Cerberus. Any fan of Greek mythology will definitely welcome the new addition since Cerberus is known as the hound of Hades, a three-headed dog that prevents souls from leaving hell. Since this is an online slot, Cerberus's job now is to prevent players from leaving the game!

Beat the Beast: Cerberus' Inferno follows the same structure of many Beat the Beast titles. There is a classic 5x3 grid layout with symbols, from card royals to helmets, weapons and Cerberus the three-headed beast itself, which pays 150x the bet. The max win in this slot is purposefully demonic at 6,666x and the RTP is 96.15%. In addition, the slot boasts a high volatility.

It would be quite apt to say that Beat the Beast: Cerberus' Inferno is a minimalist slot, at least much more so than the average one. The wild symbol comes in two forms in this game. The first one is stacked wilds, which only appear stacked on top of each other to cover the whole reel. The second type of wild symbols is the Golden Cerberus Emblem and it serves a dual purpose as both wild and scatters.

Collecting 3, 4 or 5 Golden Cerberus Emblem rewards a prize of 2x, 20x, or 200 times the stake respectively and triggers the bonus round with 10 free spins. This bonus game only has one special feature: transforming the number of paylines from 9 to 243. As a result, 3 of the same symbols on the first, second and third reels always create a win combination no matter their position. Plus, the free spins feature (with 10 bonus spins) can be retriggered by getting 3+ scatters again.

If you like the first 2 slots in this series, Beat the Beast: Cerberus' Inferno will be right up your alley since all the gameplays are so similar. But I had higher expectation for it as far as creativity goes. For a long-time slot grinders, I can no longer be excited about a new online slot game that only changes its graphics and calls it a day.

The free spins round is supposed to be the most hyped part of any slot, but here in Beat the Beast: Cerberus' Inferno, it's kinda disappointing. If players want to have 243 paylines, they can go play a slot with 243 paylines from the start instead of waiting for a free spin.