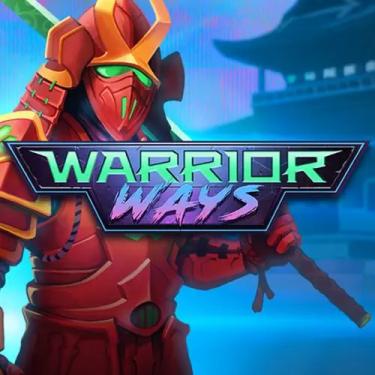 Hacksaw Gaming is famous for many things but the Duel feature is definitely one of them! So, it’s no coincidence some of their most renowned titles possess this mechanic. And what better way to showcase duels than with honorable Japanese samurais and ninjas! Warrior Ways is a strikingly colorful slot game set in an alternate Japan. The game takes place in a futuristic cyberpunk metropolis on a 5x4 slot grid, 1,024 paylines, and 2 different bonus games.

Symbols in this game have a quite unique twist. They’re associated with colors that represent each of the warmongering samurai/ninja clans. Clans are divided into four groups: Red Clan, Blue Clan, Green Clan, and Orange Clan. Each of these clans has 2 symbols, a High-paying symbol and a Low paying symbol. Warriors represent the clan's high-paying symbols, while signature weapons represent lower-paying ones.

These symbols play a major role in the slot’s main feature - the Duel mechanic. It is triggered whenever a VS symbol lands in between two Warriors of an opposing clan. This will activate the two warriors who will reveal their multiplier values and engage in a head-to-head battle. The warrior that wins will then grant you his multiplier and boost your winning combinations. Furthermore, the winning clan will also overtake some or all symbols of the defeated clan and transform them into their own.

Much like in many Hacksaw Gaming titles, Warrior Ways features two different bonus games and two corresponding scatters. The Clash bonus game is triggered by 3 Clash scatters and the Conquest bonus game by 3 Conquest scatters.

During the Clash bonus game, you’ll enter a 2-phase round. The first phase is a hold-and-spin round, in which there are no paying symbols and you instead collect resources. You start with 3 spins in your tally and try to collect as many VS symbols and Clan multipliers as possible. Each time you do so your tally resets back to 3 and you continue your spins.

The reels will moreover become clan specific. Each reel will be colored with the exception of the middle reel, where only VS symbols can land. Multipliers will increase the value of the whole reel and VS symbols will add +1 free spin to your 2nd phase, which starts once you run out of spins in the hold-and-spin phase.

In the Clash phase, you're guaranteed to trigger the Duel feature for each free spin, and instead of random multiplier values, your clans will possess the multiplier you collected in phase 1.

The Conquest bonus game plays out very similarly to the base game. However, it starts with 10 free spins and you get +1 extra spin for each new Conquest symbol. Furthermore, 4 clan banners appear on the sides of the reels.

These banners represent the health of each clan. Whenever a clan loses a duel they lose 1 health. Once a clan is defeated twice their banner is burnt and their symbols disappear from the round. You also get a +1 spin.

Love the Japanese-inspired aesthetic as well as the great soundtrack and very stylish visuals. Bonuses are a little too slow on this game but it's the perfect farm slot. Already the game paid out multiple $1,000,000+ wins from organic spins!