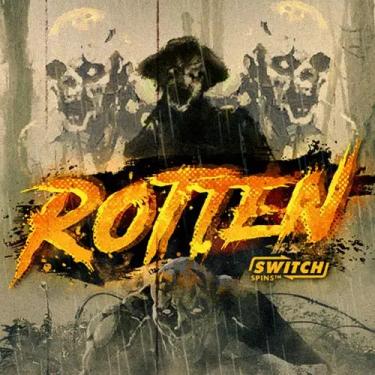 Zombies have been a staple in the media since the 1930s. Depictions of the endless, mindless, hungry horde and the triumph of humanity over them at the end never cease to entertain. In the slot Rotten by Hacksaw Gaming, fighting back is the best way to exterminate the undead. The higher the body count, the greater the reward. Destroy the decaying menace and claim the ultimate prize of 10,000x the bet.

Whether Rotten takes place in an abandoned house, a dark forest, or a carnival, there is no denying that the game is exceedingly creepy and unsettling. Of all the creatures players need to deal with, the murder clown is the highest priority target because it can easily bag 40x the bet for six of a kind.

Rotten slot plays on a 6x5 grid with 35 paylines. The RTP of the game is more than a decent 96.27%, a value higher than the average. The game’s volatility is extremely high, which fits the post-apocalyptic picture Hacksaw Gaming is trying to paint. It is best to consider it a trade-off between high risk and high reward since the jackpot is 10,000x the bet.

Rotten has three different features, each with its signature flair that can’t be mistaken for one another. The first one is the Switchspin feature, which is available in the base game and the bonus round. Landing the Switch symbol adds 1 to 10 respins. During these respins, the game picks random symbols and replaces them with either the Murder Clown or Wild symbols. In addition to increasing the number of symbols replaced, additional Switchspin symbols during respins also provide more respins. After the Switchspin finishes, the selected symbols reset.

Landing 3 Mad Scientist symbols nets players 10 Free Spins along with access to the Mad Scientist bonus round. During the round, there is a higher chance of landing Switchspin symbols than in the base game.

Players who can’t wait to get their mitts on the bonus game can opt for the bonus buy-in option, which comes with 4 different possibilities:​

Rotten showcases a gritty setting, much like one of my favorite slots, Wanted Dead or a Wild. Switchspins, without a doubt, are the core mechanic of the game and its power is best experienced in the bonus rounds. The game also hits more frequently and makes sure you won’t be sitting on dead spins for long. Big wins can appear out of nowhere, and a couple of free spins sprinkled along the way makes Rotten really worth a try.