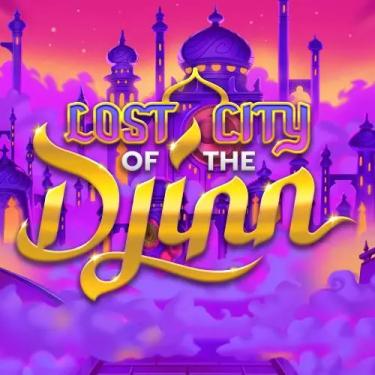 Lost City of The Djinn

Enter the enchanting Lost City of Djinn, find its barren remnants and restore it to its full glory. In return, the genies will allow you to wish for two different bonus games! Tread carefully though, genies are known to be tricksters.

The Lost City of Djinn is a cartoonish online slot developed by Thunderkick. The game is played on a 5x3 gameplay grid situated in a magical floating city that can pay up to 25,000x your stake!

The game's goal is to land 3-5 matching symbols on at least one of the 25 paylines. The character premium symbols, pay between 10x and 30x your stake on 5-of-a-kind wins, and you also get a wild symbol that will step in for other symbols if necessary to help you complete a win. Wild symbols can appear on any reel, and their payouts are the same as top-tier Djinn symbols.

The main base game money-making feature is the Massive Mystery symbol. It can only land on the 3 middle reels and it has a fixed size of 3x3. As soon as it lands, it'll turn into random matching symbols and wilds are not excluded! The only symbol that it cannot transform into is the scatter.

Scatters in Lost City of the Djinn come in two forms. The basic one has the icon of an hourglass and landing 3 or more triggers your free spins bonus game. Your bonus game starts with 10, 15, or 20 free spins depending on how many free spins scatter symbols you had in the base game (3, 4, or 5).

There, every spin during the bonus round is guaranteed to feature a Massive Mystery symbol! It will show up either partially or fully on the middle 3 reels.

The Djinn Spins feature, on the other hand, is triggered by the cash scatter illustrated by a genie’s lamp. It has a multiplier attached to it and in order to trigger the feature, you need to land at least 3 of these symbols, each on different reels. This will clear your grid and transport you to a secret treasure room. There, you’ll find your initial scatters that have become sticky.

The respins-style feature begins with 3 spins and only blanks, cash symbols, or special symbols are present during the game. The symbols that land on non-blank spaces become sticky, and the tally of spins resets to 3 with each landing. Each cash symbol has a random value between 1x and 50x your stake and you can also land the following special symbols:​

The main draw of the Djinn Spins round is Pattern Collect. Five frames will be highlighted in blue, and when all five frames are filled, their total value will be doubled. After that, the value of the pattern symbol is placed on the center symbol, and the remaining pattern symbols are removed in order to make room for more. Additionally, a new pattern is created.

A clear reskin of one of the Thunderkick’s more popular games - Baron Bloodmore slot. The vampire theme was definitely more appealing to me but the main downside of the game remains the same. The Mystery Symbols are just super weak. The respin bonus game is much better but also feels just like a Money Train 2 feature wanna-be.