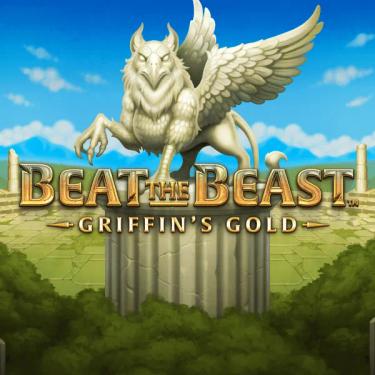 A Thunderkick’s Beat the Beast pentalogy has come to the end with a release of Beat The Beast: Griffin's Gold slot. All of the games from the series are ‘made for the brave’ that aren’t afraid to face the high volatility in a quest for big winnings.

Throughout the series inspired by the legends of different antic cultures, players explored the lair of monstrous Kraken, discover the secrets of the mighty Sphinx, went to the Cerberus Inferno, and try to trick a fearsome Quetzalcoatl. The icing on the cake is meeting the majestic part eagle-part lion Griffon famous as the keeper of treasures.

Played on a classic 5x3 grid with 9 paylines, the game takes you to the ruins of antic Greek colosseum. The betting range starts at €0.10 and goes up to €100, enabling all types of players to join the game. With more than a solid RTP of 96.14% and a maximum win of up to 22,222x the bet, the game features a very high volatility level.

Doubling as both Wild and a Scatter, the golden Griffin Emblem symbol is the start of the show. Besides the power to substitute for all symbols, five of the kind produce the highest payout in the base game of 200x the bet.

Three golden Griffin Emblems landing at the same time trigger 10 free spins. In the bonus game, a griffin evolves into a Roaming Wild.

Once it appears, Roaming wild remains on the reels until the feature ends. Before each new free spin, it roams to an adjacent position. If one or more Roaming Wilds are a part of a winning combo, 1 extra free spin is awarded.

Even more beneficial power of the Roaming Wild is the multiplier attached to it. A win multiplier starts at 1 and increases by one every time a Roaming Wild participates in forming the win, multiplying such win at the same time.

Just like that, Thunderkick’s series of mythological creatures comes to the end. It started great with Kraken's Lair and continued throughout the sequels. Although the games are so similar, this is undoubtedly a solid collection.

Beat the Beast: Griffin Gold’s slot ended the series with a bang as it retains the very high volatility, all best special features, plus way higher winning potential compared to the prequels - up to 22,222x times the bet. Overall, it is a good game that was quite generous to me.