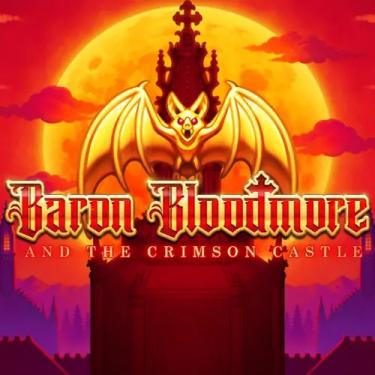 Baron Bloodmore and The Crimson Castle

Prepare to meet Baron Bloodmore as he emerges from the shadows under the blood moon. Experience the bloodlust and elegance of the vampiric lifestyle as you descend into the gothic manor and meet his eerie sisters. Unveil the baron’s secret treasures and reach the absolutely massive potential win of up to 25,000x your stake in Baron Bloodmore And The Crimson Castle slot by Thunderkick.

The main feature in the base game is the giant 3x3 symbol known as the Massive Mystery Symbols feature, which appears every now and then to keep things interesting. The 3x3 can appear partially or fully on the grid and every position in view turns into the same randomly chosen symbol (wilds included, but not scatters).

In addition, you'll encounter 3 distinct wild symbols representing the 3 vampire sisters. Besides substituting for regular symbols, they pay the same as Baron Bloodmore himself, who is the highest paying symbol. In other words, 5 wild symbols on a payline will award you 30x your stake!

In order to trigger the Bonus Round, you must land at least three-winged skull scatters in a row. When you land 3, 4, or 5 scatters, you will win 10, 15, or 20 free spins, respectively. The bonus game enhances your spins by granting you a Massive Mystery Symbol for every single spin!

Thunderkick has also included a Crimson Cash Bonus feature in addition to its regular bonus round. By landing at least five cash symbols anywhere on the screen, you trigger the Hold & Win feature, which makes the triggering cash symbols sticky as the remaining positions are cleared.

The tally starts at 3 re-spins and resets to 3 again with every new sticky cash symbol landed. Symbols that are attached to cash have values between 1x and 50x, and this feature ends after all respins have been used. This bonus game furthermore comes with three unique twists that do the following:​

The big mystery symbols are too random and feel kind of weak. I don’t like putting in the work to reach the bonus game only to then get a bunch of J symbols. From time to time, the gameplay gives off the vibes like it’s gonna blow up any moment but never actually does. Although there are a few nice bonus features, this release definitely doesn't represent Thunderkick's best work regarding slot market.