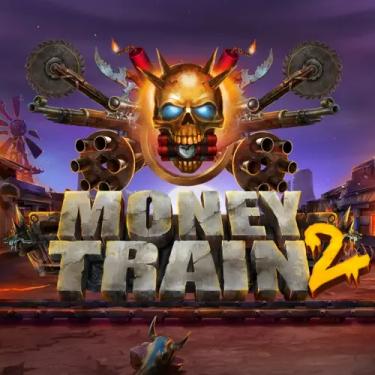 Embark on a train ride of a lifetime and win up to 50,000x your stake in the Relax Gaming’s Money Train 2 slot! Unlock the money cart, expand your reels, and take over the freight train from hell once more in this amplified version of the original Money Train.

Money Train 2 is a western-themed slot contained within a freight train full of exciting rewards. The reels are set on a 5x4 layout that can expand further in the bonus game. In the base game, the grid contains 40 paylines and there are two special symbols: a wild and a scatter. The Wild symbol can substitute for any other symbol to form a winning combination except for the bonus symbol.

However, the entire game is undoubtedly centered around the bonus symbol which has multiple functions and different forms. It can trigger the respin feature as well as the bonus game.

Landing at least 2 bonus symbols anywhere on the reels will trigger a respin feature where the reels are spun until you reach a winning combo. In addition, the 2 bonus symbols reveal random multipliers that are added together and also increase with each non-winning spin.

If you, however, manage to land 3 or more bonus symbols, you’ll trigger the Money Cart Bonus Round. The entire grid will transform into an empty board with 3 free spins in which only bonus symbols holding random multiplier values of 1x to 10x can land. There is also a golden bonus symbol which does the same thing but has a higher value - between 20x and 200x. As long as you manage to land at least one symbol during a spin your free spins will reset back to 3.

Furthermore filling an entire reel with symbols will unlock additional reels on the sides. So overall, you can unlock a massive 7x4 gameplay grid.

Besides bonus symbols, the free spins bonus game is filled with other special symbols that have their own unique functions.​

Some of the special symbols also have a persistent version, making them sticky and triggering their ability on every spin. The enhanced versions are called: Persistent Payer, Persistent Sniper, and Persistent Collector.

In the event that you fill the entire 7x4 board and spins are no longer possible, your bonus round ends but you’ll receive a 500x reward on top of what you’ve already collected. The bonus game in Money Train 2 is extremely intense but quite hard to come by. Luckily, Relax Gaming included a bonus buy feature which you can purchase to skip the base game for 100x your stake.

The best part of the Money Train 2 slot is a super fun bonus game with a bunch of features that really keeps you at the edge of your seat. Although the initial 3 free spins might seem like not enough, the retriggering option happens fairly often and ensures longer gameplay. However, special symbols are what makes this game very exciting. It is both extremely fun as well as nerve wracking watching everything unfold.