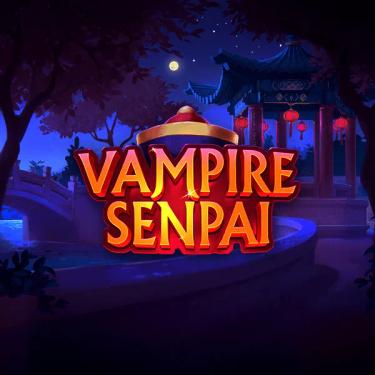 In its most common form seen today, vampires originate from the folklore of early 18th-century Southeastern Europe, particularly from Transylvania. However, tales of demonic entities and blood-drinking spirits in different forms dates centuries before it and can be found in many ancient cultures, including Chinese mythology that inspired the Vampire Senai slot by Quickspin.

Many legends of this country include Jiangshi known also as a Chinese hopping vampire. Depicted as the gruesome undead, he moves around by hopping with its arms outstretched, killing the living creatures to absorb their qi, or "life force". Quickspin has placed a more comedic tone on this traditionally dark theme with colorful visuals and excellent graphics, managing to create a vampire slot in a completely new light.

Vampires are hopping on a  5x5 grid with 40 paylines. With 96.19%, the RTP is in the average range, while the volatility is medium. Players can select the desired bet amount from a minimum of €0.10 to the maximum of €100. The winning potential goes up to around 8,800x the stake.

On the low pay side are royals from A to J in a brushstroke font, while a red female, purple man and a green matron type symbols produce medium wins. While a vampire Wild might seem scary, you want it to appear as five-a-kind bring the highest payout worth 20x the bet in the base game and 40x the stake in free spins round.

Thanks to the Turning Wild feature, every time a vampire symbol lands it converts any surrounding medium valuable card into corresponding Turned Wild. Turned symbols then also convert any human symbol into their surroundings, continuing the chain until there are no more medium cards next to it.

Besides the regular one, there’s also a special Talisman Wild. These symbols don’t naturally appear in the base game, only when the Talisman Turning Wild feature is randomly activated. That’s something that can happen on any spin, and when it does 3 to 9 Talisman Wilds appear on reels 1, 2, 3 and 4.

Landing three or more Bonus Scatters activates up to 9 Reanimated Free Spins. In this bonus round, Talisman Wilds can appear on their own and if they do, they stay locked until the feature ends. Vampire Wilds also remain on reels during free spins, but instead of being locked, they hop to a random reel position at the beginning of each spin. In addition, both Wilds award 1 extra free spin for each one that lands.

It’s always nice when you have a slot with a common theme executed so uniquely. Chinese vampires are new to me and seem like a quite original take. Features are connected to the theme as well, and Turning Wild one is especially interesting. On paper, the Vampire Senpai slot seems worthy of a spin, but I reserve a final judgment until I try it myself.