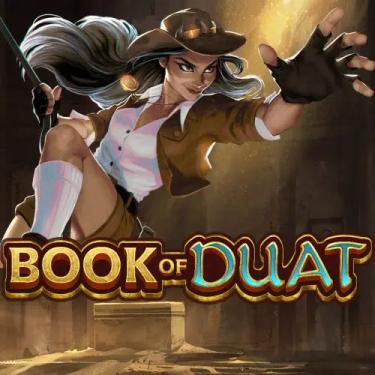 Follow the footsteps of the heroin explorer Anna to uncover the secret world of the dead. Featuring an ancient Egyptian theme, the Book of Duat promises an experience filled with free spins, multipliers and extra expanding symbols. Hidden beneath the wind-swept dune is an extraordinary treasure worth 32,760x the bet, just waiting to be discovered.

Book of Duat plays on a standard 5x3 grid with 10 fixed paylines. The frightening dark images of Anubis and Sobek are on the ancient stone epitaph and amongst the hieroglyphics is the steely-eyed Anna paying 500x the stake for five of a kind.

The math model of Book of  Duat boasts a standard RTP of 96.27%. Quickspin rated the game 5 out of 5 on the volatility scale, which means the game is unpredictable but not lacking in potential. The bonus feature in Book of Duat is where that potential can show with a massive 32,760x return on the bet.

The most sought-out symbol of the game is the Book which plays both the role of a Wild and a Scatter of the game. Getting 3, 4, or 5 of these symbols triggers the bonus round and rewards players with 3, 6, or 12 picks. On top of that, the game also grants players 50x, 500x, or 2500x the wager.

Before the bonus round starts, the game takes players to a screen filled with 20 hidden symbols to choose from. The secret characters can reveal +2 to +10 Free Spins, +1 to +4 Expanding Symbol, or 1x to 5x multipliers. Players choose which of the hidden symbols they want to uncover, spending their allocated picks in the process.

Book of Duat offers three alternatives to getting the Book Scatters. They include three levels, each costing 150x, 500x, and 1600x the bet for 3, 4, and 5 Scatter symbols, respectively.

As an old-school, straightforward slot with massive potential, Books of Duat is among favorites of many slot players. What keeps me coming back is the absolutely gigantic number of free spins this game can generate. On top of that, the game also has tons of extra multipliers and expanding symbols waiting to go. The graphics and sound design are solid but overall, it's all about those amazing extra perks you get to enjoy as a player.