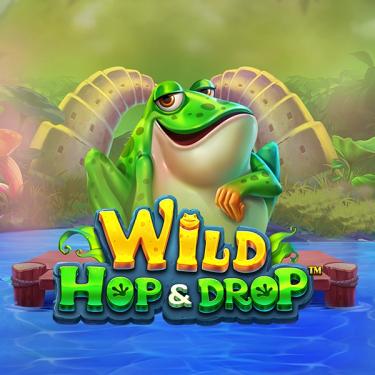 Pragmatic Play made a huge change this time. Instead of another treasure hunt with John Hunter or a trip to find hidden Leprechaun gold, the beloved developer gave players a screen full of goofy-looking frogs who are happy to be croaking atop lily pads. Wild Hop & Drop slot promises a ton of entertainment on the water surface with tons of undisclosed winning potential beneath. All of this exists alongside the jackpot of 5000x the bet.

Deep in the jungle, among the thick vegetation, lies the gleaming blue pond where the magical frogs hang out. The Wild Hop & Drop tells a frog-themed tale filled with characters that players will miss once they are gone. And even though they might seem silly to some players, the value of the colorful amphibians is no joke. Players start getting paid when they land six or more adjacent frogs, and their payout can be anywhere from 2x to 200x the bet, depending on the color, with the Green Frog being the highest-paying premium.

To maximize frog coverage, Wild Hop & Drop plays on a 6x6 configuration with 20 paylines, which can feature up to 36 symbols at any given time. Despite the lighthearted exterior, this slot can be one of the toughest games to beat. A highly volatile game, Wild Hop & Drop is rated a 5 out of 5. The RTP can fluctuate between 96.36% to 96.47% depending on whether the players have bought the bonus round. However, it offers generous and consistently decent-paying winnings - players can expect anywhere from 50x the bet to 200x the bet for 26+ frogs connected vertically or horizontally, as well as the dependable 5000x the stake just waiting for players to collect around the corner.

The huge smiling amphibian friend sitting on the left side of the grid is actually the Wild that can hop and drop in any position on the grid at any time. In the base game, the Wild appears in 1x1, 2x2, 3x3, 4x4, 5x5, or 6x6 sizes, which covers the entire play board. The point where the Wild grows to fit the screen is when players hit the jackpot of 5000x the bet, and the game is over.

Last but not least, players can opt for the bonus buy option. By paying 100x the stake, the game thrusts players straight into the bonus round with 4, 5, or 6 scatter symbols.

Wild Hop & Drop slot is a highly entertaining game that nudges you to grow your frog as fat as possible. The base game can be good for a while, but the bonus game is where the big things happen! The bonus round often plays hard to get, but once you get it, there is a recognizable feeling of satisfaction every time you progress to the next level in the bonus round. There have been multiple times when I've been close to the end game, and each time felt better than the last. Whenever I feel like chilling and grinding, I take Wild Hop & Drop slot for a spin.