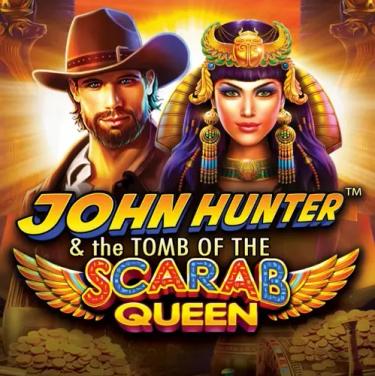 Tomb of The Scarab Queen

Join the legendary John Hunter on another expedition to ancient Egypt. Raid the tomb of the Scarab Queen and uncover her majesty’s lost riches. Keep your eyes open for that fifth reel if you plan on emerging from the tomb rich!

John Hunter and the Tomb of the Scarab Queen is a standard 5x3 reel online slot. Your objective is to land matching symbols on 25 different paylines and land a max win of 10,500x the stake! The game has 8 regular paying symbols with John Hunter himself being the highest paying one. Additionally, there are three special symbols on offer: wild, scatter, and money collect.

Wild symbols substitute for any regular symbols to form a winning combination (aside from the other special symbols). Scatter symbols appear only on reels 2, 3, and 4 and landing all 3 of them will award you with a small reward of 1x your stake and trigger your bonus game.

Present in both base and bonus games is the Money Collect feature. The Scarab Money Symbols, carrying a random cash value, can land on the reels 1 to 4 but their values can’t be gathered without the Scarab Collect Symbol that only appears on the 5th reel.

The collect symbol furthermore comes in 4 other forms with extra modifiers.​

Scatter symbols are responsible for triggering bonus rounds which begin with 8 free spins and each money symbol appearing on the reels is added to a bonus pot. At the end of free spins, the value of the pot will form a giant symbol that will cover entire reels 1-4. One final respin is triggered and if you manage to land a collect symbol on the 5th reel, you’ll collect your massive prize! The free spins feature can be retriggered without limit or until you reach the max win of 10,500x your stake.

Overall, it’s one of the better John Hunter video slots out there. There is certainly a chance of landing a massive win thanks to the 10,500x winning potential! The Money Collect feature is a great addition but it doesn’t hit that often. This is especially true for the one in the bonus game but it’s still a nice addition to the gameplay. The Tomb of The Scarab Queen, although not revolutionary, is certainly entertaining so including it into your gaming sessions won’t be a mistake.