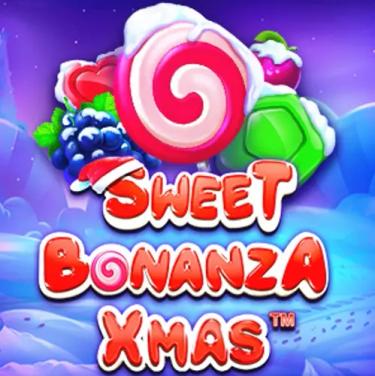 When first released, the original Sweet Bonanza has become an instant hit amongst players. It featured innovative gameplay, an unusual set of rules, mouthwatering candy symbols and a hefty winning potential. Due to its popularity, Pragmatic Play launched the Sweet Bonanza Xmas slot to honor the winter holiday season.

Basically, not much has changed except the look. The magical candy land is replaced by a winter wonderland covered with ice cream snow and following Christmas decoration. A banging tune jangles away in the background, while the grid and delicious symbols stayed the same.

Played on 6x5 grid, the game has quite an unconventional setup. Reels don’t spin - at the start of each spin, the whole grid falls into place instead. Symbols pay anywhere on the screen so there are no paylines.

You need at least 8 matching symbols to get a win, while 12+ of the red hear symbols produce the highest symbol payout of 50x the stake. Thanks to the Tumble feature, each winning combo is removed, allowing new sets of symbols to fall and hopefully lead to a cluster of consecutive wins from one spin.

Varying from $0.20 up to $125, the betting range is quite wide. So are the winning possibilities, as the maximum prize goes up to 21,100x the bet. It is a medium volatile release with RTP between 96.48% and 96.51% depending on whether the Ante Bet feature is engaged.

Speaking off, Ante Bet provides players with an option to select the bet multiplier. Depending on the selected bet, the games behave differently. 20x bet multiplier gives the ability to purchase free spins round for 100x the stake, while 25x multiplier doubles the chances of triggering free spins naturally with the more frequent landing of Scatters.

Four swirly lollipop Scatters appearing award 10 free spins. Another batch of 3 Scatters on reels during this round triggers additional 5 spins. Once the free spins start, the multiplier symbol comes into play. It stays locked on reels upon appearance while wins tumble.

At the end of a spin, multipliers in view are added up and applied to the winning total. The multiplier value starts at 2x and has a potential of reaching up to 100x.

Like its no Christmas version, this is Sweet Bonanza Xmas doesn’t pay that often, but when it does, it pays well. Remember when I won $56,680 dollars on a $250 bet? That was so sweet, even though this release is completely the same as the original in everything but visuals. So, it gets the same grade.