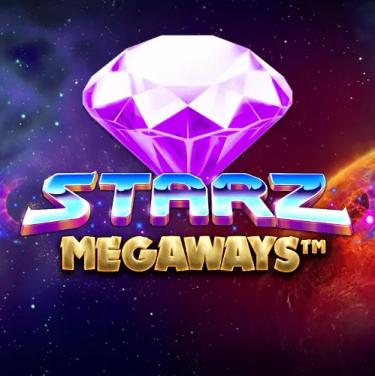 Pragmatic Play’s Starz Megaways is a spanking new celestial-themed slot with colorful images and sounds that rival those of NetEnt’s Starburst. Taking part in the cosmic journey, players can expect to win the galactic jackpot of up to 10,000x the bet! Are you ready to conquer the universe?!

Set against an awe-inspiring background of an exploding nebula of stars and space dust stretched across the cosmos, Starz Megaways plays on a six-reel, seven-row grid with a total of 117,649 possible ways to win. A mix of gems and planets makes up the bulk of the symbols, with the highest-paying premium being the green gem, whose value can go up to 5x the stake for six of a kind. Players need to land at least 3 of a kind to start collecting winnings.

Starz Megaways is highly volatile, reaching a maximum of 5 out of 5 on the Pragmatic Play volatility scale but the RTP proves to be more forgiving at 96.48%, which meets the industry average. Wild symbols can land on reels 2,3,4, and 5 and when that happens, Wild expands to cover the entire reel. Furthermore, the Wild symbols will play a crucial role in the bonus round.

If anyone knows how to make a simple yet entertaining video slot, it’s Pragmatic Play. Starz Megaways is the perfect example. Players need at least three simultaneous blazing ball scatters to start the Bonus Round. By hitting 3, 4, 5, or 6 scatters, the game rewards players with 6, 8, 10, or 15 free spins, respectively.

During the Bonus Round, Wild symbols become sticky when they land. Theoretically, this is the most plausible way to win at Starz Megaways since a full screen of Wilds will result in massive win, probably leading to a jackpot. However, a trivial downside is that players cannot retrigger the feature.

Sometimes you don’t need complicated gameplay and showy images to impress. Pragmatic Play kept things to the point and clean and there is no reason to complain about that. Although Starz Megaways doesn’t have much to offer, I still find the Bonus Round extremely fun. In my experience, Scatters hit more than usual, and Wilds just adds an extra oomph to the journey, making it clear what you need to do to achieve the ultimate goal. This one is definitely one of my go-to space-themed slots from now on.