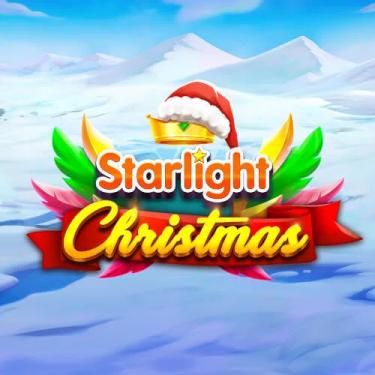 Starlight Christmas is Pragmatic Play’s sequel to their beloved Starlight Princess, a slot that comes with overdose of kawaii energy and multipliers. All those qualities plus festive Christmas decorations are available in this new rendition of the anime-inspired game.

In Starlight Christmas, 8+ matching symbols on the grid will result in a win regardless of their positions. The layout of the game is pretty spacious (6x5) to facilitate the wins. Symbols include colorful gems, stars, moons, hearts, and suns which pay 50x for a 12+ combo.

The RTP of the slot safely resides at 96.5% while the max win is 5,000x. Despite the cheerful appearance, players shouldn’t expect sunshine and rainbows all the time because the variance here is maxed out at 5/5.

Starlight Christmas also comes with the tumbling feature with no limit for the number of tumbles that can happen. But the real treat in the base game is the random multipliers carrying value from 2x all the way to 500x. These multipliers appear in green, blue, pink or gold hearts, offering progressively better values for each color, and they only take effect after all tumbles have ended.

Collect 3 - 5 scatters to enter the bonus with 15 free spins and an instant prize of 3x, 5x, or 100x the stakes. The only difference in this round is that all multipliers collected are added together into a total multiplier. This multiplier, however, only applies on wins where at least another multiplier lands on the reels. In addition, 3+ scatters during the bonus will get you 5 more free spins. If you’re not a base game guy, Starlight Christmas has both Ante Bet and Bonus Buy options for 100x the bet.

On the one hand, if you’ve played Starlight Princess, this version doesn’t bring anything new to the table in terms of gameplay mechanics. But on the other hand, Starlight Christmas is still objectively a great slot especially for those who haven’t tried the original. The random multiplier is a simple yet satisfying feature that can produce some of the most magical slot moments. So overall, among the Christmas season offerings, this game is a solid choice.