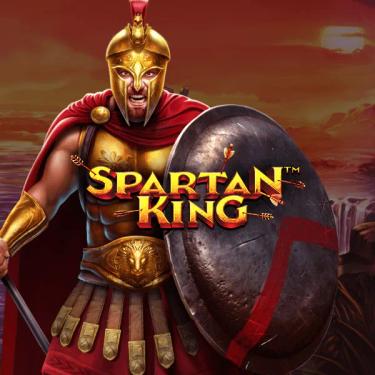 Coming from the giant studio Pragmatic Play, Spartan King is an online slot game that takes players back to the epic time of constant warfare between ancient Greek warriors. Although you may be greeted with a tranquil, wavy Mediterranean sea and beautiful waterfalls, the rollercoaster ride ahead may not be so peaceful.

You can find many classic Spartan symbols right when you open up the slots, namely swords, helmets, battleships and Spartans themselves. The normal Spartans grant a juicy 7.5x the stakes with 5 in a row and the wild symbols(Spartan in gold helmets) pay 10x.

Playing on 5 reels and 4 rows with 40 paylines, the experience of Spartan King may seem ordinary at first, until you see a big shield appear. This 2x2 shield takes up 4 spots on the reels and acts as a big wild symbol that can appear randomly during the base or the bonus game.

Similar to many Pragmatic Play games, Spartan King possesses the maximum volatility but the RTP is actually quite high at 96.6%. Collecting scatter symbols in this game both pays a hefty sum and triggers the free spins round. Also known as Bonus symbols, 3, 4 or 5 scatters reward 1x, 5x or 20x the bet and 8, 10 or 12 free spins respectively.

The bonus game for such a supposedly epic game like Spartan King is, unfortunately, not so epic. The only special free spins feature here is that when the 2x2 shield wild lands, there will be an accompanied random multiplier of x2, x3, x5, x10 or x25 which applies to the entire payout of that spin. In addition, land 3,4 or 5 scatters to retrigger 8, 10 or 12 free spins with no limit.

Why does a Spartan slot have such little vigor? The only thing that makes the base game interesting is the 2x2 shield wild but it doesn't happen very often at all. The bonus round is even worse - sometimes among 10 free spins, the big shield appears like 3 times. That means you basically spins 7 spins with nothing special about them except for being free.

If you're really into Spartans and a cinematic soundtrack, you may find some charms in Spartan King. But the stale gameplay and even the winning potential don't seem to be able to compete with other slot games although it has a supposedly high RTP and 7,494x max win.