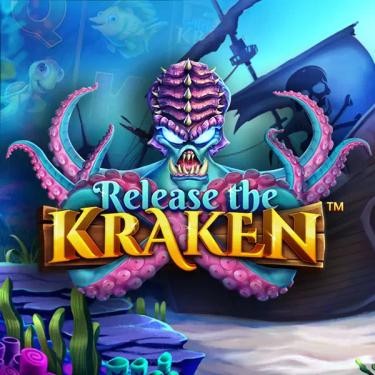 The monstrous sea creature born from the worst nightmares is rooming loose on reels in the Pragmatic Play’s Release the Kraken slot. It is hungry for big wins, but in order to get to them, it first needs to be uncaged. Dare you to release the Kraken and face its wrath?

Dive into the ocean depths and try to beat the Kraken in real money gameplay you can enter by placing a bet from $0.20 to $100. Don’t let the wrecked ship in the background of the 4×5 with 20 paylines to spook you, as nice wins might await ones brave enough to face the legendary sea monster. Up to 10,000x  the stake to be exact, which is the maximum winning potential of this game.

The real action starts when the bonus features kick in. As you can guess by the name, Random Spin round activates out of the blue. On any spin in the base game, the reels can be covered with three tentacles with “Pick Me” sign. Choose one to unlock one of the following modifiers:

Besides a regular Wild and Kraken Wilds available only during the Random Spin feature, special symbols include Bonus, Free Spins, or Chest Bonus icons. When Bonus symbols land on reels 1 and 3 at the same time with Chest Bonus appearing on reel 5, the Sunken Treasure Bonus is activated. Three chests appear on the screen, and opening one at a time reveals cash prizes until a Collect sign is drawn instead of a reward. Rooming Kraken Free Spins

The highlight of the game are Roaming Kraken Free Spins, triggered with Bonus symbols landing on reels 1 and 3 along with the Free Spins symbol on reel 5. Instead of a set number of spins, the player opens multiple chests containing   +1, +2, or +3 spins. Collect sign is also in the mix and when drawn, the picking is over and you continue to the feature with the number of free spins won from chests.

During this feature, the number of paylines increases to 40 and a progressive win multiplier starting at 1x is added to the mix. Every time a Wild lands, it remains roaming on reels, increasing the multiplier by +1 at the same time.

This slot by Pragmatic Play has been generous to me. Although I didn’t kleen the maximum prize of up to 10,000x the stake, wins of over $70,000 and $125,000 won from the bonus round seem more than decent in my book. So troops, go ahead and Release The Kraken!