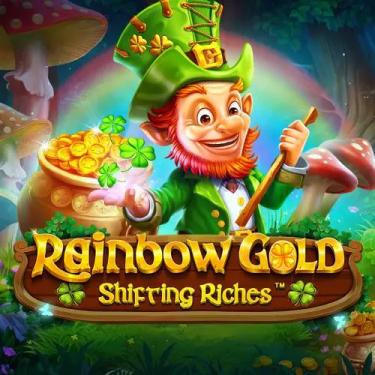 Rainbow Gold is another wonderfully done work of art by Pragmatic Play combining slots and the Irish lucky leprechaun theme. Chasing after the magical leprechaun in this richly decorated world, players need to reach the end of the rainbow and snatch the stunning prize of 5000x the stake.

Set against the background of a magical forest filled with glistening mushrooms and glowing butterflies, the game plays on a grid made out of 5 reels, 3 rows with 20 paylines. Right from the get-go, Rainbow Gold instantly catches the players’ attention with colorful images and clear outlines accompanied by crisp sound effects. While chasing the dream of gold, players should keep their eyes on the Horse Shoe, the Well, or the Mug of Beer, amongst others, as these premium symbols pay out from 4x up to 20x the bet for a 5-of-a-kind.

Rainbow Gold’s math formula is standard with a higher than average RTP of 96.45%, players should be able to utilize this to negate the game's high volatility. Additionally, the game includes an Ante Bet option. By increasing the bet by 25%, players should begin seeing more Wilds coming out to play. The Wilds in this game are the Leprechaun symbols, which on their own pay 25x the bet for a 5-of-a-kind while also substituting for any symbols that are not Scatters.

One of Rainbow Gold’s main features is the Top Tracker Prize Reel. Situated on the top reel is the Prize Tracker which moves from left to right with the left-most prize getting dropped off and the right-most prize getting renewed every time the player spins. Here is the specific listing of the prizes:​

To get the prizes, however, players have to make the Leprechaun Wild appear on the reel of that prize. When the Leprechaun hits, the prize above him is awarded to the player. The prizes on the tracker don’t change when the players make an adjustment in the bet, so players can strategize without worrying too much.

The second feature of Rainbow Gold is the Super Free Spins. When it is triggered via the prize tracker, the game zooms out, and an additional grid made of 5 reels and 3 rows is added. Each grid has its own prize tracker which functions exactly like the base game, and all grids spin at the same time with each free spin. The listing of the prizes is below:​

Playing the game is quite entertaining, but the design could be a bit improved. In addition to the fun time in the base game, obtaining the big bonuses through the Wilds is always a blessing. I especially enjoy the Super Free Spins round with all those hefty prizes. All in all, it’s a joyful Irish-themed slot where leprechaun can bring you as much as 5,000x in his golden pot which makes it extra fun to play.