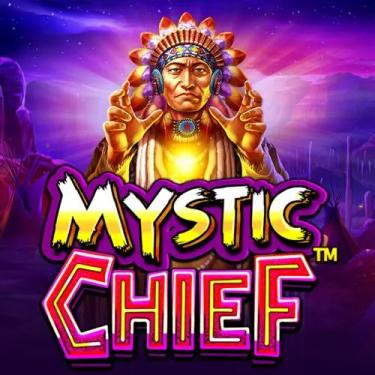 Join the spiritual tribe of the Mystic Chief and unlock the Super Mode in this exquisite Pragmatic Play slot. Follow the guidance of the Native American ancestral spirits and connect symbols on 576 paylines. The title features a somewhat unusual layout, however, the trick is to keep an eye out for the three middle reels as this is where the Chief Wilds lands and brings big rewards!

Mystic Chief is a 3-4-4-4-3 grid online slot with 576 paylines, 13 Native American themed symbols and a potential of rewarding up to 5,000x your stake. In order to win, your objective is to land 3 to 5 matching symbols on at least one of the 576 win ways. Different symbols reward different amounts. The highest paying symbol here is the Native American Lady who can reward up to 5x your stake on a full line.

The main feature of Mystic Chief is without the doubt the wild symbol called the Chief Wild. At first, this symbol appears as a 1x1 symbol, however, after landing it expands to fill the entire reel. Chief Wild can appear on the middle 3 reels only, and it substitutes for all regular symbols to help you complete winning combinations. When more than one expanding wild appears in the same win, the multipliers are added together.

Aside from wilds, the game features two more special symbols - bonus and scatter. Bonus symbols come in the form of Dream Catcher which turns a random selection of pay symbols on the reels 2, 3 and 4 into 1x1 regular sized wilds when two or more land simultaneously in the same base game spin. The Dream Catcher symbols are only available on reels 1 and 5 and have further functions in the Super Mode bonus game.

To trigger the bonus game you’ll need to acquire golden scatter symbols. Likewise, these also appear on the middle three reels only, and you need three to trigger the bonus round. You get 8 free spins along with an expanding wild that moves around the three middle reels each time you win. You are rewarded with 1 extra spin per bonus symbol you land, but if you manage to land two in the same spin, in addition to extra spins, your bonus game upgrades the feature to the Super Free Spins mode.

Just when you're ready to give up on it, this slot always brings big rewards. It's one of those games that pays out big boy wins out of nowhere. Almost like it's trying to keep you hooked so you’ll end up chasing it. The 2nd phase of the bonus round isn’t even an upgrade really. It’s more of a trade. You get wilds but without multipliers and have to give up the ability to get more spins. That’s super underwhelming for something called SUPER free spins.