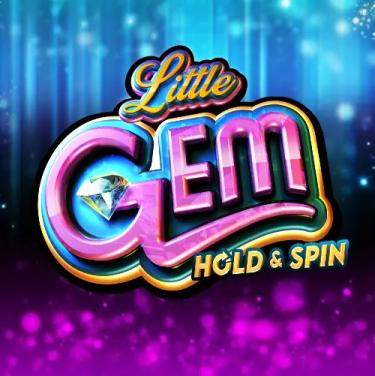 A blindingly bright game from Pragmatic Play in collaboration with Reel Kingdom, Little Gem Hold and Spin displays the performance of gems like never seen before. Participating in this little show, players can win up to 2,460x the stake.

Playing on a 3 reels, 3 rows grid with 5 paylines, this compact game is set against a background of teal, purple, and blue Aurora Borealis with a generous sprinkle of glitters for some fabulous effects. As expected, Little Gem Hold and Spin revolves around gems, as they are all very hard-to-miss big pieces of minerals. The highest paying symbols include the Emeralds, the BARs, and the Diamond which can pay up to 50x the bet when they land 3-of-a-kind on the winning line.

Mathematically, Little Gem Hold and Spin has an RTP of 96.7% while it also boasts medium volatility, the rating of 4 out of 5 on volatility meter. Finally, players can look forward to the maximum winning of 2,460x the stake.

Wilds in this game substitute for every symbol and pay as much as diamonds at 50x the stake. They will also expand to cover the entire reel and help if a winning combination is available. Money symbols appear on the middle reel only, they pay anywhere from 1x to 20x the stake. Landing 3 Money symbols on the same spin to trigger the Spin and Hold feature. When it happens, the triggering symbols stay sticky while the other 2 reels are cleared.

This is not a game I particularly enjoy. There is nothing wrong with gem slots, but the grid in this game is too small to play. Most of this fun lies in the bonus round, but getting there is an absolute grind, and the lack of free spins is not helping the game either. It gets dreadfully dull sitting through all the dead spins without any proper rewards. All in all, a game that is not worth my effort.