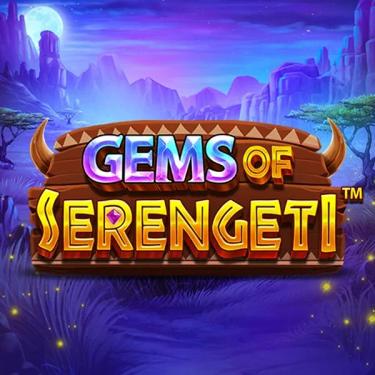 Gems of Serengeti is an exciting and visually stunning online slot by Pragmatic Play. The game takes place on an African safari teeming with wildlife and includes entertaining bonus features, jaw-dropping multipliers, and a massive jackpot of 4000x the bet. Gems of Serengeti promises an adventure like never before!

Set against a grand backdrop of waving grass sea and vertical spiky rock cliffs, Gems of Serengeti plays on a 5-reels, 4-rows configuration with 20 win ways. Throughout the game, players can experience everything from watching exotic, rarely-seen pride of lions to going through the constant struggle for survival, the battle between humans and nature. Symbols are following the theme but players would want to keep an eye out for the Tribal Male Warrior symbol which pays 37.5x the bet for five of a kind.

Despite the colorful exterior, Gems of Serengeti holds a very high level of volatility. However, the game does provide more than a decent RTP of 96.4%. Ultimately, players shouldn't pay much attention to these trivial numbers and prioritize winning the jackpot of 4000x the bet.

The tribal-looking Mask is the Wild of the game, which substitutes for every symbol except Scatter and nests a hefty payout of 50x the bet for five of a kind.

To start the Respin bonus round players must collect at least 5 Gem symbols. After the feature starts, all non-gem symbols disappear from the grid and the bonus round is played out with only Gem symbols on the reels. The game rewards players with 3 initial respins. When players land at least one Gem symbol, the respin counter resets. The Respin round ends when Gems don’t land for spins in a row or when the screen is completely full of them. The game then pays players according to the number of Gems on the screen. The numbers range from a meager 2x the bet for 6 Gem symbols to 500x the bet for 20 Gem symbols.

On the outside, it might seem that Gems of Serengeti don’t offer too much. Even though the design meets the industry standards, it is the gameplay that is the holy grail of this slot. I love how the bonus stacks up for one massive payout. I think the only thing that keeps this game from being rated much better in my books is the limited free spins option and the relatively small jackpot. However, it is, without a doubt, still a game I enjoy and would recommend.