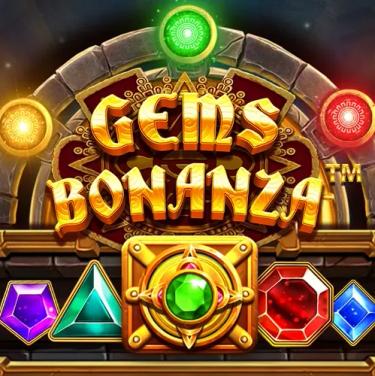 Explore Pragmatic Play’s Aztec adventure and discover some of the shiniest and most precious stones in the whole world. Gems Bonanza is an exciting tumble slot featuring the cluster pays mechanic on a massive 8x8 grid. Avoid hidden booby traps, solve the Aztec puzzle and fill your golden fever bar to have a chance to win up to 10,000x your bet!

Gems Bonanza slot machine is a unique gambling experience utilizing the tumbling and cluster pay mechanic. Instead of the classic spinning animation, symbols fall tumbling from above and fill the 8x8 gambling grid with gem symbols.

These symbols form a winning combination in clusters. Specific paylines aren't needed; instead, as long as you land five or more symbols connected, you'll be rewarded. Winning symbols are then removed and new ones fall in place. This repeats indefinitely as long as you keep clustering symbols.

Pragmatic Play’s Gems Bonanza has seven regular symbols and a wild symbol. As a special symbol, Wild substitutes for any other symbol to form a cluster win. In addition, it can also simultaneously support multiple winning combinations with different symbols.

The main base game spin features are colored mark spots. During every spin, a random color will appear behind a random symbol. Triggering a win with a symbol on top of that colored mark will boost your game with the following benefits:​

Winning multiple spin features in one spin will always result in them being played in the following order: Nuclear, Wild Gem, Squares, Colossal Symbol, and Lucky Wilds.

The bonus game in Gems Bonanza is quite unique as it doesn’t come in the traditional free spins form. Instead, the slot game utilizes a special progressive meter called the Gold Fever progressive feature. It’s a bar that fills with every win during each spin. The meter resets after losing a spin and it takes 114 winning symbols for it to fill with liquid gold.

Once you manage to fill the meter with liquid gold your Gold Fever bonus round will trigger. The bonus game begins at level 1 with all five spin modifiers activated and a 2x multiplier. Leveling up increases your multiplier and you can push your bonus round up to five levels. Getting to the next level requires collecting 116, 120, 125, and 130 symbols, respectively. For levels 2 to 5, multipliers are 4x, 6x, 8x, and 10x, and with each level, you’ll again receive all the 5 modifiers. For avid bonus hunters, Gems Bonanza also offers a bonus buy feature which lets you skip the base game and jump right into the bonus game for a flat fee of 100x your stake.

Quite a unique take on bonus games by Pragmatic here. I actually quite enjoy the progressive meter in place of free spins. Feels fresh and less scripted. Makes the base game also really fun and engaging but the animation is a bit slow sometimes.