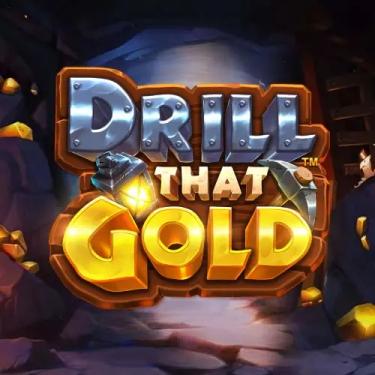 Head deep underground in Pragmatic Play’s gold-mining adventure - Drill That Gold. Experience two different slot-playing modes - the regular one or the premium one with the unique Ante Bet option.

Drill That Gold by Pragmatic Play is an online slot played on a 5x3 grid with 20 paylines and 10 paying symbols. In order to win, you need to land three to five matching paying symbols on one of the paylines. The highest paying symbol here is the dwarf symbol and it pays up to 10x your bet on a full line.

To help you with forming winning combinations, the game features a wild symbol. It has the same value as the dwarf but it can moreover step in and substitute for all symbols (except scatter).

In the base game, whenever you manage to land a full vertical stack of dwarf symbols, you’ll transform the entire reel into a silver drill symbol. The silver drill is a massive wild symbol that can reveal a random direct money award of up to 100x your stake. This money reward however isn’t guaranteed, which is where the Ante Bet feature comes in handy. Since it turns all drills to golden, it guarantees an instant cash prize! You can turn this feature on for 25% more per spin but also turn it off whenever you like.

Another base game feature is the Spin Modifiers. You can see the miner on the right-hand side of the reels constantly messing around with broken cable ends. On any losing spin, there’s a chance for the miner to successfully connect the wires and jumpstart your seemingly dead spin into a win of at least 10x your stake!

During the bonus round, both the silver and golden drills are active but they’re much easier to obtain. Anytime a dwarf symbol hits on the reels it will nudge and bring down a full vertical stack of more dwarfs. This will consequently transform them into silver/golden drills resulting in some pretty volatile action.

Although visually impressive and feature-packed, Drill That Gold slot is not the most impressive Pragmatic Play release in my book. The popular provider did try to install some mighty extras into the classic-looking grid and base game to infuse reels with high-level entertainment and excitement. Drill That Gold is far from a boring slot but it can’t match the top-rated Pragmatic titles. Still, it can produce some shockingly big wins when you least expect it! That’s exactly what happened to me spinning these reels!