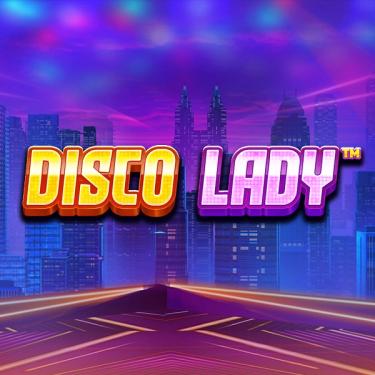 Hopping on the Pragmatic Play time machine to once again experience the golden age of the 80s! With the Disco Lady slot, players can look forward to the most bombastic dance music of the era and a big jackpot of 5000x the bet.

Set against a background made of polished wooden dance floor flanked by massive subwoofers, Disco Lady plays on a 5x3 configuration with 243 win ways and is a great treat for all the music-themed slot fans. Among the gleaming glasses is the highest paying premium, Lady Disco herself which pays 8x the bet for 5 of a kind.

Disco Lady is a highly volatile slot, rated a 5 out of 5, so players need to brace themselves against unexpected changes and massive swings in win-loss ratio. However, the RTP is lenient at 96.55%. Nevertheless, players should only focus on the most important number in the game, the max win, which stands at a whopping 5,000x the stake.

A unique feature of the Bonus Round is the constantly active Global Multiplier. Depending on the starting number of Scatters, the game rewards the players with increasing bonuses. Starting at 5 Scatters, the game rewards players with a 1x multiplier to start, which increases by +1 after every free spin, up to a possible 12x multiplier at the end of the event or 24x if players manage to hit the 12 extra free spins by collecting five more Scatters during the round.

On the surface, Disco Lady looks like an average slot with top-notch graphic design and some chill quality music to relax to. However, this game goes hard with the multipliers. Getting to the Bonus Round is not an easy task, but once you get there, I promise you’re in for a fun time. I’ve had many jaw-dropping moments with how insanely high this game’s multipliers can go. This game is not to be taken lightly! It's definitely worth trying if you are willing to risk a little in the short term for long-term big gains.