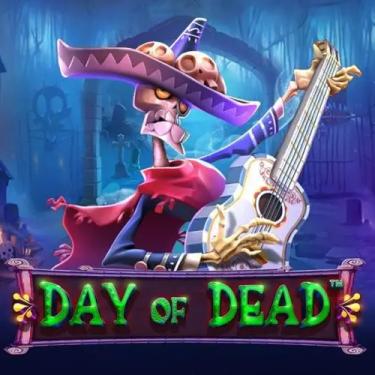 Another great addition to the Pragmatic Play’s family! Day of Dead brings “Dia De Las Muertos”, the annual celebration day for deceased loved ones in Mexican culture, to the slot reels. In this colorful game filled with vibrant images and a soothing soundtrack, players stand a good chance of winning 4,500x their bet.

Day of Dead plays on a 5-reels, 4-rows grid with a total number of 20 paylines. It is set against a backdrop of an eerie, foggy, dimly lit town where the only source of light comes from the candles that the characters bear. In this game, the highest paying symbols can get the players anywhere from 6 times up to 15 times the bet for a five-of-a-kind.

Pragmatic Play celebrates the Day of the Dead with a rather high RTP of 96.5% while the volatility of this game is rated high or 5/5 to be more precise. This should not deter players, however, as the maximum reward is well worth the risk at 4,500x the stake.

Aside from regular Wild symbols, there are also Expanding Wilds which don’t only expand to cover the entire reel but also reward players with a free spin. The expanding wilds will move from left to right until they disappear from the grid.

This game is fun to play as getting free respins happens relatively regularly. The game revolves around the free spins, as they usually do, and it is also super entertaining collecting all the wilds on the screen to continue the feature. Although it won’t be in my top 10, it is still a good game with a little twist in gameplay so I can see myself returning to it as a player.