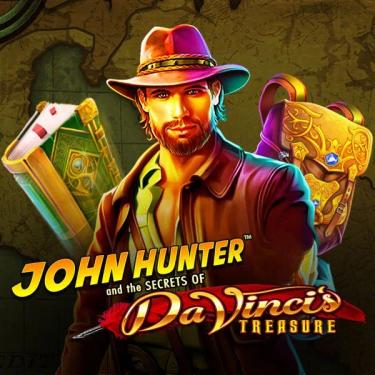 John Hunter returns for yet another pursuit of riches. The well-known and well-loved face accompanies players on a journey to the 1600s to crack open the secrets of Da Vinci’s Treasure. In this game, three exciting mechanics will keep players on the edge of their seats while they seek the grand prize of 9,600x the stake.

Right off the bat, players are greeted with some of the best slot visuals to date. Da Vinci’s Treasure is set against a dimly lit background made of what appears to be an old map and compass, which provokes a sense of exploration. The premium symbols are superb as well, as they are represented by some of the most famous renaissance creations such as the Da Vinci helicopter and the Code Cryptex, along with John Hunter himself, which can pay up to 32x the stake for a 5-of-a-kind.

Da Vinci’s Treasure slot plays on a standard 5x3 configuration with 25 paylines. The math model is looking bright as well, with the return to player (RTP) of 96.53%. Pragmatic Play presents the game with very high volatility, standing at a maximum of 5 out of 5. However, big risks mean big rewards, as the game can theoretically hit up to 9,600x the stake.

The slot also comes with 3 bonus features that make the game extra interesting. To gain access to these features, players need to score at least 3 Codex symbols on reels 2, 3, and 4 simultaneously. The game then randomly chooses a feature to display on the screen, these include:​

I thoroughly enjoy playing this game. As you probably have guessed, the feature I like the most is the Free Spins round. Da Vinci’s Treasure slot offers straightforward gameplay, is easy to understand, and has earned me some massive wins. I get so excited each time this round triggers since I know it offers a decent potential for respins, as well as the massive multipliers that come with it.