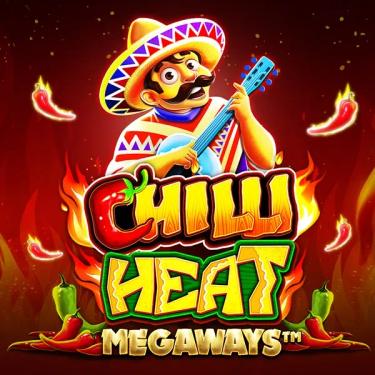 Back in 2018, Pragmatic Play released Chilli Heat, a slot celebrating Mexican culture with many interesting features. Fans of the original will be pleased now that there's a sequel called Chilli Heat Megaways, which retains all the good things from its predecessor while adding on a Megaways twist!

Chilli Heat Megaways is bright and colorful, infused with Mexican culture in symbols like Tequila, hot sauce and Banjo player. The top symbol can earn you 10x the stake while low symbols pay out from 0.6x to 1.5x for a 6x combo. This rate is typical for a Megaways slot since there are over 200,000 ways to win plus the cascading effect.

You can bet from $0.2 to $100 a spin and with the max win of 5,000x, the ultimate prize one can get out of Chilli Heat Megaways is $500,000. The slot also amps up the spiciness for the thrill-seekers with a 5/5 volatility and an RTP of 96.5%. The big wins usually happen when players unlock the Respins feature by collecting 6 or more Money symbols.

The Respin feature starts after all the winning symbols are paid, at which point normal symbols disappear and only Money symbols remain. These symbols will have a random prize on them. You begin with 3 respins on special reels with reel 1 and 6 locked. If at any time a new Money symbol hits, it will stay there for the rest of the round while your respins number is reset to 3.

The respins can also be retriggered with special symbols which only appear on the horizontal reel on top. Each special symbol has a different effect and they don't stay on the reel after a respin. After you have no respin left, you can collect the prizes on all the money symbols in view.​

From the very first moment, Chilli Heat Megaways made a good impression on me for its vibrant visuals and welcoming soundtrack. The slot keeps things simple by adding no unnecessary fluffs to the base game and lets the core Megaways mechanics do its magic.

However, the Respin round is the opposite of that. Respins can be madly boring if done wrong, but the variety of special symbols in Chili Heat Megaways adds a lot of depth and engagement to the bonus round. All in all, this slot is the example of how to be tasteful: adding spice in just the right spots.