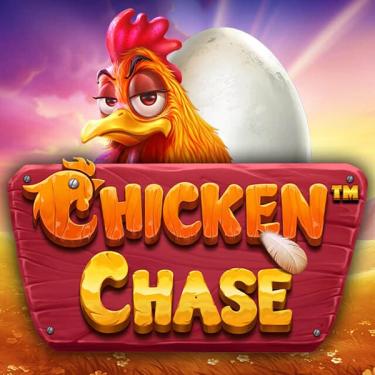 Chicken Chase is Pragmatic Play’s latest take on the poultry-themed slot scene. While playing the game, players get to enjoy the light-hearted music and happy-go-lucky attitude provided by it. In addition to being fun and easy-going, the game incites players to play as long as they are satisfied with the modest 210x jackpot.

Chicken Chase plays on a humble grid of 5 reels and 3 rows. There's no doubt that this game is about hunting poultry, but instead of the familiar coyote, we see the big bad wolf instead. The artworks from Pragmatic Plays are as beautifully drawn as always, as the premium symbols - Roosters, Turkey, and Chicken - are popping out of the screen with payout anywhere from 30x to 80x the bet. The highest paying symbol, however, is the Wild Wolf lurking around the corner, which pays a whopping 200x the bet for a 5-of-a-kind.

Mathematically, the game RTP is in an average range of 96.48%, which is common for Pragmatic Plays games. The volatility is surprisingly low, a rare sight in today’s slots in general, making winning that much easier. Players should look forward to a rather joyous journey to the ultimate prize of 210x the bet.

Chicken Chase has a rather unique Spin and Hold feature. The mechanic is simple - when players hit but do not score a 5-of-a-kind win, the game rewards them with a free spin. Then the game pays after the free spin or when the players hit 5-of-a-kind in the first place. Chicken Chase will offer players 2 options between the initial spin and the respin, where players can either manually pick which reel they want to hold for the respin or let the game decide by itself.

Landing 3 or more Golden Eggs scatters triggers the bonus feature. This bonus round is pretty simple, players get to choose 1 of 4 chickens. The chicken then drops an egg with random prizes according to the number of scatters won, which are listed below:​

I'll give Chicken Chase credit for having a fun theme. But let's be honest, the lack of a defined free spin mechanic is very unappealing to me. The Spin and Hold feature is okay, there are free spins here and there but it’s not enough and I don’t really vibe with it.

There's more, the maximum winning is 210x, which is a bummer. I find myself hitting the bonuses every now and then, but when I hit the winning cap, it’s instant game over. I feel the game could be so much more fun if they raise the jackpot a bit, making the game longer. Overall, a simple game where I can get easy wins, but not worth my time.