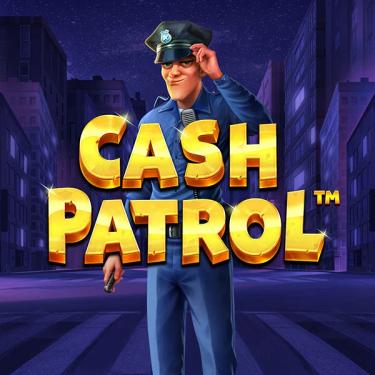 After many colorful and cheerful slots like Sugar Rush and The Dog House, Pragmatic Play decided to do something completely different. The popular studio is taking you on a Cash Patrol where you get to join corrupt cops collecting bribe money from gangsters. Whether you’re on the side of justice or not, the incredible potential reward in this game will surely tempt you!

Opposite to what you might infer from the hustling, crime-filled street in the background, Cash Patrol doesn’t go crazy with its volatility level; in fact, it’s sitting at a medium ⅗. The slot layout also looks pretty standard with 5 reels and 3 rows, and its default RTP is 96.5%. Moreover, the max win players can get is 10,500x the bet.

Cash Patrol keeps it simple with only 8 normal symbols - the 4 premium include handcuffs, officer’s hats, money, and patrol cars that pay 32x the bet for a 5-of-a-kind. You also have a wild in the shape of a police badge that can replace all normal symbols.

The base game is heavily spiced up with the money collect feature. There are money symbols that carry a random value from a predefined set and 5 types of collect symbols to help you ‘collect’ the money:​

Even with the medium volatility, Cash Patrol has crafted a bonus round that embodies the ‘go big or go home’ spirit. It begins with 8 free spins once players have landed 3 scatters. Then, all money symbols that appear will be added into a bonus pot. When the round ends, the bonus pot reappears on the screen in the form of a giant money symbol that covers the first 4 reels, and the fifth reel is then respined. If the collect symbol hits, players win the pot. Plus, 8 more free spins can be retriggered with no limit by landing 3 scatters.

Cash Patrol is a super fun and unique game, but it’s probably not for everybody. Even though the theme sounds a little serious, the slot makes sure to use funny, light-hearted music and visuals to set an appropriate tone. As for the gameplay, most people would definitely enjoy the money collect feature: it reinforces the theme and has a lot of varieties.

The bonus game is where players might be divided because its real value relies almost entirely on that last spin, and for some players, it can be too risky. But personally I’m very much a fan: players like me enjoy that climax of intensity and we’re here to win big.