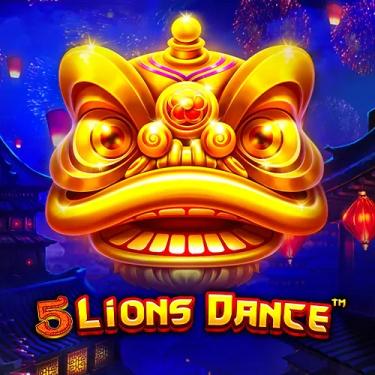 Pragmatic Play’s 5 Lion Dance is another Asian-themed gaming experience filled with exotic culture and scenery. The game takes its inspiration from the mighty Chinese lions known as Shi, who are well-known as a sign of wealth and prosperity. If you get to perform the traditional prosperity dance with the legendary five lions, you could win up to 2,700x your bet!

5 Lions Dance plays on a traditional 5x4 gameplay grid. The symbols consist of customary playing card symbols, A, K, Q, J, 10, and the five lions themselves. Each lion is distinguished by its unique color with the golden one being the highest paying symbol.

In addition, the game has 1024 paylines and features a wild symbol represented by a golden ball symbol. The wild symbol does not possess a value of its own but is instead used to help form winning combinations. This is because Wilds can act as a substitute to all symbols (except Lion Reel and scatters) and form a payline that would otherwise be incomplete.

The main base game feature in 5 Lions Dance is the Lion Reel Bonus feature, which is triggered by the Lion Reel symbols. These can only appear on reels 3, 4, and 5. Landing three symbols simultaneously will trigger the bonus and combine your reels 1 and 2 to form a special multiplier reel. This reel will immediately spin and award you with a random value of 5x, 10x, 15x, 20x, 25x, 50x, 75x, 100x, 150x, or 200x.

The last feature of this Pragmatic Play slot is the free spins bonus game, which is triggered by special drum symbols. These can appear on reels 1, 2, and 3. When you manage to land a scatter symbol on all three reels, in addition to triggering the bonus game, you’ll be rewarded with a small win of 1x your stake.

Once your bonus round starts you’ll be granted 10 free spins. During each spin, all lion head symbols transform into the same colored one. Meaning, landing any lion head symbol in a single winning line will result in a win! Your bonus round can be extended with additional bonus scatter symbols. Landing 3 symbols again during the free spins feature will extend your game by another 10 rounds!

The base game feels a bit monotonous. Not many engaging features, just the same old lion head with a different color staring at me. The bonus game triggers quite frequently though and can pay really well sometimes but the fact that a bunch of golden lions can transform into lower green paying ones kinda puts me off. Not gonna lie, the Megaways version feels much better. Considering that, you probably won’t see me playing this version a ton on stream.