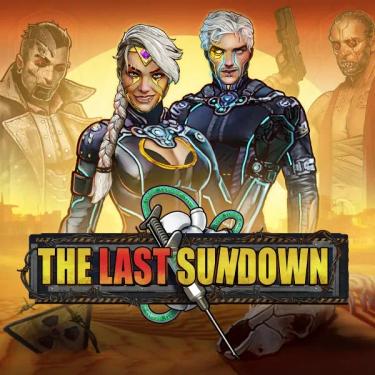 The Last Sundown, developed by Play N Go, takes place in an alternate universe where evil warlords drain the resources out of the Earth reducing it to a wasteland. Although far from being the first futuristic video slot, an apocalyptic theme and the creative splitting symbol feature helps The Last Sundown stand out from the crowded slot market.

The Last Sundown appears like a normal 3x5 slot with 243 paylines but any time one type of symbol (except scatter) can split into 2, pumping the paylines up to 7,776. It's also a pretty volatile slot at 8/10 along with a solid 96.2% default RTP. The bet range may be narrower than some other games: from $0.1 to only $50.

Every piece of graphics in The Last Sundown is stylish to the maximum. Instead of the boring J, Q, K, A, low-paying symbols are badass weapons and among the top symbols including various characters, the female protagonist one rewards the most at 5 times the stakes for a 5-of-a-kind combination. This prize point also applies to the wild symbol, and it's a pretty modest one to compensate for the high number of ways to win.

Landing 3 scatter symbols: heart-shaped medkits, to activate the bonus round with 8 free spins plus 5x the total bet. But if you manage to land 4 or 5 of them, the instant reward becomes 10x or 50x instead. When the round starts, 1 symbol is randomly selected to be a splitting symbol for the rest of the bonus, and another is chosen as the collection symbol.

You gotta give a shout-out to the production team for The Last Sundown - the theme is distinct and every weapon/character is animated with intricate details. The random symbol split mechanism makes the game an interesting hybrid between traditional and Megaways, so even a base game spin becomes engaging because of it.

However, the free spins feature is sometimes a hit or miss. The way you can collect symbols to make them split is a fun mechanic to play for sure, but the winning potential doesn’t always match that fun.