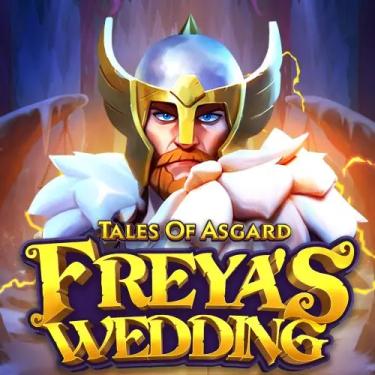 Recover Thor’s mighty hammer by disguising the god of thunder in a umm… wedding dress?! That’s right, the hammer has been stolen by the evil Ice King and he has asked for Freya’s hand in marriage in exchange for it. Follow Loki's mischievous plan in Tales of Asgard: Freya's Wedding, trick the evil Ice King, and be generously rewarded by the gods of Asgard.

Tales of Asgard: Freya’s Wedding by Play’n Go is a light-hearted experience with pretty intense gameplay. The game takes place in the icy lands of Jötunheimr with Thor, the main character, hilariously disguised as the goddess Freya.

The base game is set on a 5x4 gameplay grid with ten normal symbols, two special symbols, and 30 paylines. The first special symbol is the wild symbol represented by Freya. Wilds substitute for any other symbol except for scatter and can be used to complete winning combinations. The Freya wild symbols moreover come in an expanded form through the Here Comes Freya feature. This is a random event that can happen on any spin. Thor will walk down the aisle dressed up as a bride and stop at a random reel granting you an expanded wild with a 2x multiplier.

The second special symbol is the scatter bonus symbol represented by the missing Mjolnir. These appear only on reels 1, 3, and 5, and once collected ‘Freya’ will transform to Thor turning all Freya wilds into Thor wilds. You’ll immediately get an expanded Thor wild on the 5th reel and an indefinite amount of free spins. With each spin, the expanded Thor wild moves to the left increasing its multiplier by +1.

Your free spins continue as long as an expanded Thor wild is on the screen. If not, however, you’ll be granted 1-2 ‘second chance’ repins during which you’ll have a chance of extending your free spins up 30 by landing more Thor wilds. The attached multiplier can have a maximum value of 10x and the max win is capped at 2,500x your stake.

The game’s volatility is as wild as its theme. The bonus game has really good pressure and keeps it interesting with constantly ongoing features exploding on the screen. In terms of payouts, it’s actually pretty decent. Free spins are frequent and get retriggered pretty much every time. Overall a pleasant surprise by Play’n Go. They’ve clearly put a lot of work on this one.