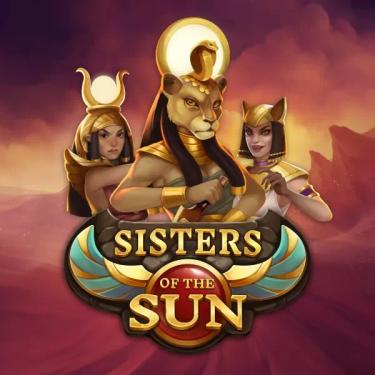 Sisters of The Sun

In Ancient Egyptian mythology, Sekhmet, Hator and Bastet are considered to be daughters of the mighty God of Sun, Ra. Three goddesses are appearing together in the sisterhood bond in many sources, as they do in the Sisters of The Sun slot by Play’n GO.

These Egyptian deities are a force to be reckoned with. In legends as on reels as well. Each sister has a special power that blesses players with valuable rewards.

Instead of classic paylines, the game is featuring Cluster pay mechanics across the 5x5 grid. It is a highly volatile game with an RTP of 96.20%. Bet per spin starts from €0.10 and ranges all the way up to $100. The game has the potential to produce payouts of up to 15,000x the stake.

Since this is a cascading slot, winning symbols are removed and replaced with new ones. Better yet, every time a combination of 3 winning symbols is removed, a Wild is placed in the empty middle position.

At the same time, 5 random positions on the reels are marked with the Eye of The Ra on each spin. The Win Multiplier increases by 1 if a winning combination includes this symbol.

Every sister has her own special power, shown when the Goddess Power feature activates randomly in the base game. Depending on which sister is displayed on reels, the following modifier is applied:​

Landing just one Scatter symbol represented as a glowing scroll is all that it takes to trigger the Sisterhood feature. In one free spin, all goddesses perform their powers one after another. Clearing the grid during Sisterhood triggers the free spins feature.

The free spins bonus round comes in three different modes - one for each sister. It’s up to the player to choose the favorite goddess and start free spins with her power modifier. Sekhmet awards 4, Hator 5 and Bastes 8 free spins.

Keep in mind that modes with fewer free spins come with higher volatility, but also more valuable rewards. No matter which one you select, Win Multiplier is carried over from the Sisterhood feature and doesn’t reset during all free spins. The number of Eye of Ra locations increases from five to 10, triggering the chosen Goddess Power on every non-winning spin.

This slot has three different types of modifiers and free spins modes. Rings a bell? It should, as it features almost the exact bonus features like Yeti Hotel Way released months before this title.

But compared to this release, the Sisters of the Sun slot is lacking the fun factor and interesting gimmicks. Both in gameplay and aesthetics. Looks like a real snooze fest, so it’s a hard pass for me.