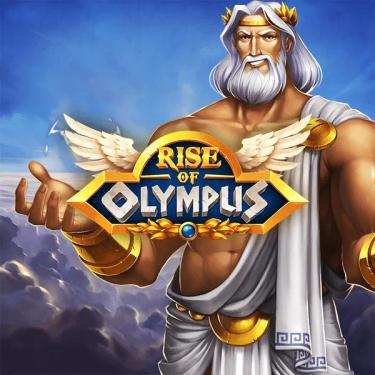 With its Rise of Olympus slot, Play’n GO takes players right into the Greek legend. Here the almighty deities are fighting for the command over the reels. But the power is flickery, so as their rain changes, so does the scenery, making this one visually very attractive game.

Beyond what it beats the eye lays numerous features, cascading reels and various winning possibilities. If you think this is yet another slot inspired by ancient Greek mythology, think again, as it has much more to offer.

High above the ground, under the sea or in the inferno, the 5x5 grid with cascading mechanics awaits players to join in by placing a bet anywhere from $0.20 to $100. These Gods are not playing around, do expect extremely high volatility. The RTP is set at 96%, while those who receive a divine blessing can look forward to a maximum prize of up to 5,000x the stake.

A golden pegasus is a Wild that substitutes for all symbols and brings the biggest payouts - 50x the bet for 5 of a kind. Zeus, Poseidon and Hades are other highly valuable symbols, while a combo of them also produces wins. A harp, warrior mask, trident and a lightning represent the lowest cards.

Beside producing higher wins, each of the three Greek Gods has a unique ability to help create winning combos in the randomly activated Hand of God feature. Hades transforms one set of symbols into another symbol, Poseidon gawards up to 2 wilds, while Zeus destroys two sets of any symbol.

Left on the reels, you can notice the Meter that fills by landing a five-of-a-kind win combination with any of the god symbols. When it is full, the Wrath of Olympus feature starts where Gods show off their previously described abilities, increasing the chance of activating the free spins.

That will happen when the grid is clear. When this happens, the player gets to choose one of the 3 free spin modes. As you can guess these are also represented as Hades, Poseidon and Zeus, awarding 4, 5 or 8 free spins with high, medium and low volatility respectively.

Choose wisely, as the selected Hand of God will also be active on every non-winning free spin. During free spins, the multiplier doesn’t reset and can reach up to 20x, while fully charging the Meter adds more free spins up to a max of 20.

If this release looks familiar not just because it's an overused theme, your feeling is right. Basically, Rise Of Olympus is a reskin of Play’n Go anime slot Moon Princess with the same mechanic. However, that doesn't take anything from it.

This Greek adventure is a well-made game with good potential. Although I didn’t hit its maximum winning potential of 5,000x the stake, it paid out quite well. I would say that a $10,000 win from a €20 bet is more than, won’t you agree troops? Nevertheless, when everything combines, it is still an average game.