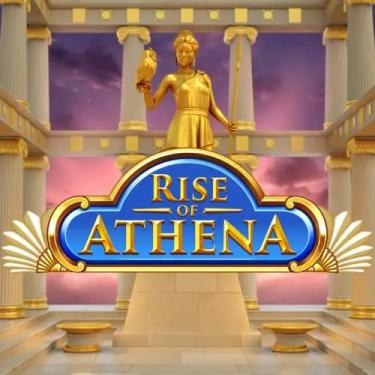 Released in 2020 by Play N Go, Rise of Athena is all about ancient Greek mythology. Unlike other games with the same Greek mythology theme, Rise of Athena is one of the rare ones that does not have Zeus as its main character. Instead, it is about his daughter, Athena, goddess of wisdom and war. Players can show their admiration for the Goddess and win up to 5000x the bet while enjoying some of the finest depictions of Greek architecture and music.

The game starts off with a classic and minimalist look with marble Parthenon pillars in the background contrasting with the blue Aegean sky. The golden ornaments and decoration give the game a very ancient yet luxurious look. The music is very relaxing, which combines really well with the theme. Rise of Athena features a standard 5 reels, 10 paylines grid, which is normal for such a great art style.

When it comes to the stats, Rise of Athena’s are quite identical to other 10-liners created by Play N Go. Players can bet ranging from $0.1 to $100 per spin. While the volatility is rated at a medium of the spectrum by the developers, the game offers up to 5000x the stake as well as a RTP of 96.2%.

There are 10 regular symbols included in the symbol collection, split into highs and lows. With the classic 10 to A royal cards make up the low-paying ones. While the premium set of symbols is presented, with increasing value, by scrolls, pots, helmets, Pegasus, and then Athena herself. Players can begin winning by getting 3 symbols from the left-most reel, while Athena needs only 2. A full combo is achieved by combining 5 of the same symbols. The royals are worth from 2x to 6x of the stake for a 5 of-a-kind combo. More valuable symbols pay up from 10 to 150x the bet.

Wilds in Rise of Athena resemble ancient Greek coins, which rank from copper to silver to gold, with values of x1, x2, and x3 respectively. While individually increasing the bonus payout, the multipliers can in turn multiply each other if more than 1 appears in a spin. This can increase up to a massive number of 27 times the stake.

Scatters in Rise of Athena are represented by an owl, the symbol of Zeus. These scatters can add massive multipliers in addition to free spins as well.​

A small tweak during the bonus game is that all Wild symbols are now Sticky and will lose their values up until they disappear from the grid. With each spin reduce their value by 1.

Rise of Athena is definitely one of those games that are just very enjoyable to play. Aside from dynamic and interesting gameplay, video and sound effects elevate the whole experience to the new level. Multiplier Wilds that get sticky during the free spins round are a nice touch and can make your winnings go through a roof in a single spin. Overall, one of the better releases by the popular iGaming provider.