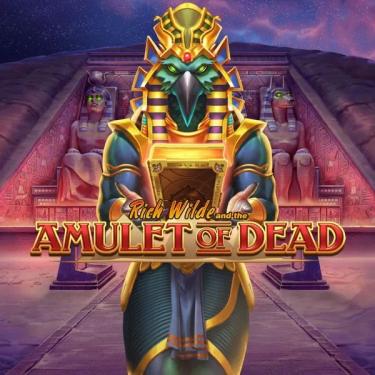 Rich Wilde And The Amulet Of The Dead

Retirement for Rich Wilde? Not on Play’n GO’s watch! Dive into ancient and mysterious tombs once again. Uncover the hidden treasures with the very best treasure hunter, Rich Wilde. Find the Egyptian Amulet of Dead and you just might hit the max win of 5,000x your stake.

Rich Wild and The Amulet of Dead is a very customizable game that can fit anyone’s preference. You’ll be able to adjust the coin value, the number of coins, paylines, and even the speed of spins. The gameplay is very similar to Rich Wilde’s previous adventures and mostly to the legendary Book of Dead slot.

Rich Wilde and The Amulet of Dead slot game separates itself from previous versions with the Thoth Wild Multiplier feature. Thoth Wild symbol has multiple properties. It serves as a regular wild that helps to create a winning combination and if fully stacked on reels 2, 3, or 4 it will activate a multiplier. Each reel rewards a different value. You can get a 2x, 3x, or 5x bonus on each reel respectively.

Like in most book slots scatters and wilds are represented by a single symbol. In this case, it’s the Pendant symbol. Landing 3 or more scatters will trigger the free spins bonus game. During which, a special expanding symbol is randomly chosen.

Landing the randomly chosen symbol anywhere during the free spins round will result in the symbol expanding, covering the entire reel. In addition, a fully expanded Thoth wild is capable of replacing the special expanding symbols if it lands adjacent.

Rich Wilde and The Amulet of Dead design is a convenient book slot. You can have a high-paying high volatile slot or a frequently rewarding low-variance machine just by tinkering with the betting options. A great choice for picky and demanding players. And if that wasn’t enough, you can moreover double each win with the classic double or nothing gamble feature mini-game.

A book slot without the book? I mean, all my favorite symbols are there. The chicken with ears, golden helmet guy, even the kukumba symbol is identical. So, why not just stick with the original? The Thoth Wilds are indeed nice. But are they nice enough for me to pick this slot over other Rich Wilde games? Not sure about that, comrades. In any case, the updated visuals are a breath of fresh air, so you might see me take it for a spin on stream.