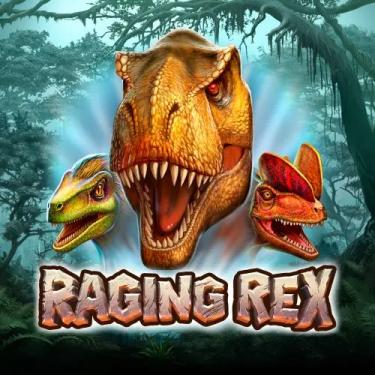 Capitalizing on the popular dinosaur theme, designers at Play N Go created an exciting adventure with lively images and sound effects, which accumulated into a great and entertaining game named Raging Rex. Fans of Buffalo Blitz will appreciate the wide 6 reels, 4 rows grid, and 4,096 paylines available in the game.

Raging Rex is set in the ancient misty jungles of the prehistoric world of dinosaurs. Featuring animated dragonflies in the background, accompanied by top-of-the-line exploration music and very clear, bold sound effects, Raging Rex takes players back to the time when dinosaurs ruled the Earth. You can recognize the low pay symbols easily, as they are the lizard, scorpion, and other insects trapped in colorful ambers. The high pay symbols are the Velociraptor, Triceratops, Dilophosaurus, and Parasaurolophus, which give you 7.5x your bet for a 5-of-a-kind.

Based on the stats, this slot is up to industry standards. Players can place bets from $0.2 to $100. The game’s high volatility is contrasted by its flexible RTP at 94.34%, 4096 pay lines, and a maximum winning at 5,000x the total amount of your stake.

The wilds in this game are represented by the angry alpha predator itself, the Raging Rex. As per usual, wilds can substitute every other symbol except for the scatters. The wilds can trigger rampage mode when they appear on reels 2 to 6. When this happens, a free respin is awarded, then, the stack of wilds becomes sticky and walks towards the leftmost reel with each subsequent spin.

The scatters in Raging Rex are the falling meteor. Landing at least 3 scatters will trigger the free spins. The rewards are as follow:​

Additionally, when triggering the Raging free spin event, players are presented with two options: Wild Hunt and Primal Rage. Wild Hunt offers players the possibility of multipliers being added to any standard Rex Wilds (non-stacked) that land on the reels, combining up to an upper cap of 243x. Primal Rage will randomly place fully stacked wilds on any reel from 2 to 6 and walk to new reels with each spin. Additionally, 2 or more scatters that appear during free spins will add extra spin potential to possible unlimited free spins.

This is one of those classics that has been around for a long time with really good music and visual effects. It has medium volatility, very satisfying bonuses, and can offer big payouts. Overall, it’s quite immersive and fun.