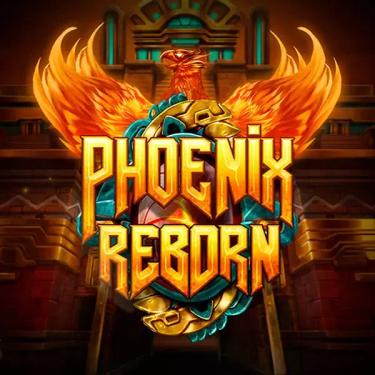 Phoenix Reborn by Play N Go is an Aztec-themed game featuring the exciting expanding wilds mechanic and winnings up to 5000x your bet. Filled to the brim with Aztec symbols, jungle creatures, as well as the glorious fiery immortal mythological bird itself, Phoenix Reborn promises players the ancient civilization experience they crave.

Putting ancient civilizations into games is not an uncommon practice. We’ve had the Greeks, the Vikings, and the Chinese on a regular basis. Phoenix Reborn has a backdrop of an ancient Aztec temple in the middle of a deep green jungle. Listening to some very standard music and satisfying sound effects, players will immediately recognize the symbols of the game. It has 5 stone symbols representing the low pay, toucan, panther, and snake for the mid pay, and a male and female warrior with the female warrior giving you 10 times your bet for 5 across the pay line.

The main feature of the game is the expanding wilds, which is symbolized by the fiery, very well drawn, and animated Phoenix. Being the most rewarding symbol, the Phoenix pays out 25 times your bet when 5 appear across the pay line. The odds to trigger the Phoenix expanding wilds is pretty high, however, you can trigger the event by getting 5 Phoenixes filled up the grid, then, you are guaranteed to bag 1000x the amount of your stake. Pray to the Aztec gods to be on your side.

Scatters in Phoenix Reborn are represented by golden coins with the face of the Sun God on it. When at least 3 of them are on the screen, the Rise of the Phoenix feature is triggered:​

Additionally, during the Rise of the Phoenix event, if 2, 3, 4, or 5 Sun God Coins appear, the event will retrigger, giving you 3, 7, 12, 20 extra respins respectively. This mechanic plays a crucial role in your winning, as the Phoenix will appear on a random reel with each spin, making it easier to fill your screen with Phoenixes, getting you the most reward out of the game.

Rise of Phoenix definitely has a lot of charm in it. Top-notch animations are the reason why its gameplay is very immersive and entertaining. Landing a full screen of expanding wilds is the main prize and if you’re lucky enough to get it, like I was, it will fill up more than a few of your satchels.