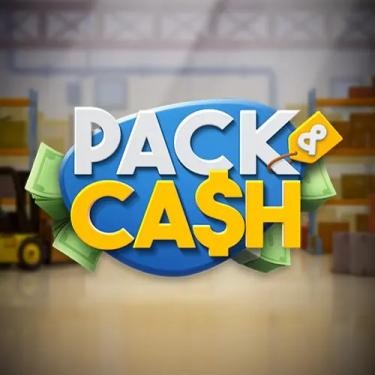 One of Play N Go’s most excellent creations, Pack and Cash stands out with a simple and unique theme - mail-sorting. Packed to the brim with well-drawn, well-animated symbols and a familiar tune commonly heard in shopping malls, Pack and Cash delivers a massive winning potential of 10,000x the stake in a very distinctive and satisfying way.

Played on a 5x4 grid with 1,024 paylines, Pack and Cash depicts a depot with shelves, boxes, and forklifts much like any common warehouse. The game’s background is full of motions with animated cranes and forklifts hauling boxes of goods around, giving a sense of a truly bustling workplace. The symbols are drawn beautifully, from rubber ducks to boxes of chocolate, making each of them instantly recognizable. Players should keep their eyes out for the Wild Yellow Suitcase symbol, however, as they are the highest paying symbols at 5x the stake for a 5-of-a-kind.

The stats of Pack and Cash are up to industry standards. The RTP of the game is 94,2%, which is quite average. However, players should expect good news as Play N Go rated the game 7 out of 10 on the volatility scale, which goes rather well with the light-hearted theme of the game. Finally, with a max win set at 10,000x the bet, players can end leaving the warehouse in grand style.

The first special feature of Pack and Cash is the Cascade feature. Landing at least 3-of-a-kind on the grid creates the win. Those symbols are removed while others move from right to left on the grid and new symbols are added to fill out the empty spots. Furthermore, the game incentivizes winning by adding a progressive +1 multiplier every time the player gets a winning combination. The multipliers are reset on any paid spin.

The second special feature is the Special Delivery feature. This feature triggers randomly after every non-winning spin. In it, 1 of 2 modifiers is activated. Up to three modifiers may be activated per feature trigger, and they guarantee to create a winning combination:​

The third special feature is the bonus round in the form of Free Spins. By hitting at least 3 Global Express scatter symbols, players can gain anywhere from 3 to 20 free spins depending on how many nudges each scatter has to make to move out of the grid. Additionally, you can retrigger the feature up to 75 free spins in total, and you're more likely to encounter Express Package Mystery Symbols.

On any base game or bonus round spin, between 3 and 8 Express Package Mystery symbols can appear, and turn into the same paying symbol. Moreover, these symbols can become Wilds, increasing players’ chances of landing a huge win.

This is a unique game with hefty winning potential and favorable volatility. The unusual way the reels spin and all the special features incorporated into the gameplay make this release highly entertaining. Free spins provide lots of possibilities for grand prizes and personal bests. At the end of the day, it's a one-of-a-kind and enjoyable slot that I like coming back to from time to time.