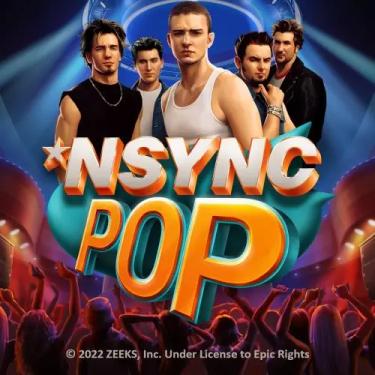 Bust out those baggy cargo shorts and rock some frosted tips for the comeback of NSYNC! Justin Timberlake’s boy band is back in town for a final performance in Play’n GO’s NSYNC POP online slot. Meet your idols on an unusual 2-3-4-3-2 gameplay grid and unlock up to 2,400 different paylines!

NSYNC is a branded slot by Play’n GO that features the popular 90s boy band that included Justin Timberlake, JC Chasez, Chris Kirkpatrick, Joey Fatone, and Lance Bass. Each of the 90s pop icons has its own premium symbol that pays between 6x and 10x your stake for 5-of-a-kind wins.

You’ll be landing these symbols on a very unique 2-3-4-3-2 grid which has 144 paylines, to begin with, but up to 2400 in the bonus game! There is also a Wild that, besides paying the same as the top-tier Justin Timberlake symbol, it also substitutes for all other symbols to help complete winning combinations.

You will also notice a special symbol called 'Pop' that appears from time to time. It’s a mystery symbol that appears at random and transforms into the same randomly chosen matching symbol (including wild symbols) each time they appear.

When three golden 'N' scatter symbols appear on reels 2, 3, and 4, the Free Spins get activated The! feature is triggered and you are awarded 8 free spins. Extra rows are added and filled with Pop symbols above and below the regular grid. These are popped when they land on the same reel. As soon as the pop mystery symbol feature is completed, the positions that were popped become regular positions.

Consequently, the number of possible winning combinations increases, and by popping all 10 additional positions, you have a 4-5-6-5-4 grid with 2,400 possible win ways. Furthermore, Wild Pop symbols can appear during the bonus round. Every time they land they explode and reveal a sticky wild symbol that stays in place for the duration of the bonus game. Also, they activate Pop symbols in rows at the top and/or bottom.

If by the end of the round, you’ve managed to activate all of the 10 pop symbols on the extra rows, you’ll trigger an Encore Spin. This will grant you one last spin in which all your collected sticky wilds will stay in place and only premium NSYNC premium symbols can land on the reels.

NSYNC wasn’t exactly my jam back in the day but Play’n GO has clearly put effort into making this title nostalgic. For a branded slot, it's actually quite decent. The gameplay is unique enough to feel like its own game and not just a cheap design with a boy band slapped on it. But, the keyword here is “branded”. Unless you’re like a die hard fan, you shouldn’t stick to branded games too long.