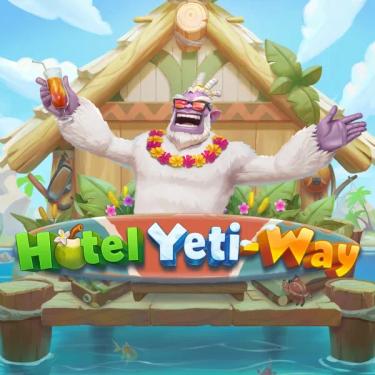 Hotel Yeti-Way slot by Play’n Go features bigfoot in the unexpected surrounding. But even Yeties needs a vacation from time to time, so this one packed his flip flops headed to the tropical island.

See how the well-known winter creature is handling the summer activities like surfing, scuba diving and bungee jumping. Every time the Yeti goes wild and tries any of these fun ventures, nice things happen on reels as well.

As the protagonist, Yeti is the Wild that substitutes for all symbols but Scatter. Yeti Wild also trigger one of the following modifiers when it lands in the base game:​

Before the feature begins, it’s up to the player to decide which of the three free spins mode will activate. Brave ones who go on Bungee Jumping have increased chances of getting up to 4 stacked Wilds, while players who choose Surfing to get up to 8 Wilds added on the grid with each surf. Pick Scuba Diving free spins bonus round for high-paying Shark symbols to be frozen on reels and award further respins.

Hotel Yeti-Way is a fresh, fun game both in its presentation and gameplay. Wild modifiers are quite frequent in the base game, while three different bonus rounds give players the opportunity to choose free spins mode to their liking.

I like a Scuba Diving bonus and it actually paid very well. Due to the very interesting concept and engaging bonuses, I give this game two thumbs up.