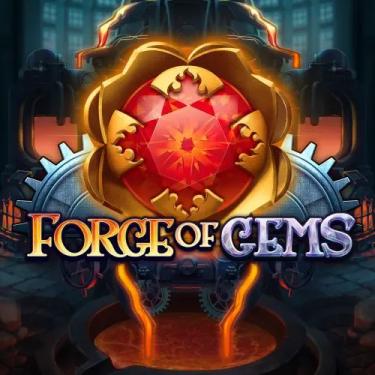 Fire up the furnace and collect glamorous gems in the latest addition to Play’n GO’s gem series - Forge of Gems. Use the Forge Reel and obtain powerful modifiers that enhance your gameplay. Unlock multipliers, fill your board with wilds, or split your symbols and increase the number of your paylines!

Forge of Gems is a part of Play’n GO’s gem series that utilizes dynamic PayWays. Many other mechanics and designs are shared between the games in this series and fans of Prism of Gems will recognize the almost identical symbol icons.

The game’s premium gemstones pay between 0.5 and 1x your stake wherever you land 3 to 5 of them in one of the 243 paylines. Besides the paying symbol, the game also features a wild symbol. Its purpose is to help you complete winning combinations by substituting for any paying symbol. It also possesses a 3x value of their own on 5-of-a-kind win-way combinations.

Forge of Gems utilizes the cascading mechanic. Whenever winning combinations are formed, subsequent symbols are removed making space for new ones to fall from above. This repeats as long as you keep landing payline combinations.

The main feature of the game, however, is The Forge Reel which slides in special modifiers on every spin. These modifiers must be triggered first by removing the symbols below with the cascading mechanic. The modifiers can then do one of the following:​

The last feature of Forge of Gems is the Gembox feature and to trigger it you’ll need Red Jewel scatters. These appear anywhere on the reels and you need to rack up at least 3 in the same cascading sequence. A Gembox will appear and spin, awarding either an instant cash prize or free spins for your bonus round.​

During your free spins bonus game, your Forge Reel will not feature blanks and also guarantee a multiplier. Furthermore, multipliers from the base game will be carried over and your multiplier meter will not reset as long as the bonus round is active.

Forge of Gems is a step in the right direction for Play'n GO, which receives a lot of flak from the community for its low payouts. The game’s volatility is actually very nice and in fact, most of Play’n GO’s releases featuring splitting mechanics have been quite enjoyable. This game is held back though by the Gembox feature. Free spins are not guaranteed and flat cash prizes are always a second-rate feature that feels more like a punishment.