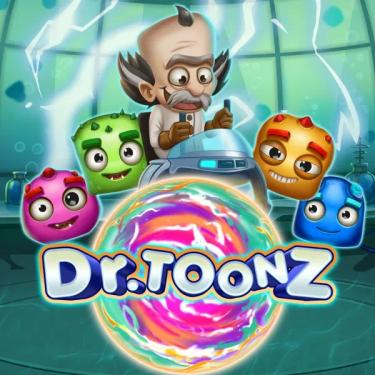 Ever wondered who's the genius mind behind Reactoonz that have conquered the slot world with their cuteness? Well, you can meet their creator in the Dr. Toonz slot by Play N’Go

The sequel of the hit games Reactoonz and Reactoonz 2 is actually a prequel of the series, representing a form of origin story. These lovable creatures came from the lab of a wacky scientist who is the protagonist of this release. Let’s see what new features he invented to make the gameplay more interesting.

Dr Toonz himself is hovering on the left side of the 6x4 grid filled by cute reactoonz with different values. The slot uses a dynamic payways system, thus producing between 4,096 and 262,144 winning ways. It is a highly volatile slot with RTP of 96.25% and a breathtaking winning potential of up to 22,000x the bet.

As this is not enticing enough, there are also numerous bonus features that makes gameplay even more exciting. Starting with removing the winning symbols and replacing them with the new ones thanks to the cascade feature. Cascades keep happening as long as winning combos are created.

Winning cascades are charging the Quantumeter held by Dr Toonz by 1. Once it hits 3, it’s considered full, Quantumeter activates, awarding randomly 1 charge feature per spin or a free spin:​

Activate 10, 15, 20 or 25 free spins by landing three, four, five or six Scatters respectively. Once this bonus round begins, Quantumeter starts at 1 or 2 charges on each free spin.

Keep an eye above the grid during free spins as 2x payway symbols can randomly appear there. Landing 2x on each reel opens the opportunity to get the maximum 262,144 ways to win.

When I first scored $32,220 from the bonus round in Dr Toonz slot, I was so surprised and sure it’s not supposed to go like this in every single bonus round. However, the second win of $55,230 on just a hundred dollar bet also in free spins mode, proved me otherwise.

Although the maximum hit of up to 22,000x the stake might be rarer to score, nice awards should go your way often thanks to up to 262,144 ways to win. So troops, I’ll give this cookie game a stamp of approval.