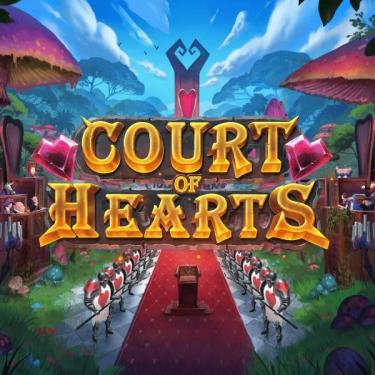 Wonderland is full of oddities and quirky weirdness. Armies battling on chess boards? Who’s to say they don’t also hash it out in slots!? The far superior 2D game. Court of Hearts by Play’n GO is by far one of the most accurate depictions of the wonderful land created by Lewis Carroll. Defeat the evil monarch that is the Queen of Hearts with the help of your friends and win up to 8,500x your stake!

Court of Hearts is a cascading online slot game. Whenever you land a winning combination, your matching symbols will be removed and replaced by new symbols falling from the top. The new symbols can further trigger more winning combos, which will repeat as long as you keep winning. This base game feature alone can get you significant wins in online casinos if you, for example, keep landing the queen’s scepter wild symbol.

The main feature to look out for when you play Court of Hearts is the Rabbit Hole bonus symbol. It is a special symbol that will summon 1 of the 3 supporting characters. ​

As for the bonus game, you’ll trigger it by collecting 3 pocket watch scatter symbols. Scatters have a dedicated meter that is outside of the 5x3 gameplay grid and resets for each spin. Whenever you land any single scatter the symbol will teleport onto the meter. Disappearing and creating more space for cascading symbols and potentially new scatters.

Another way to get more scatters is with the White Rabbit Reward feature. This is a random event that can happen at any point during the base game before a spin. A rabbit will appear and reward you with 2 scatter symbols.

Once you get to the free spins bonus round most of the base game stays the same. However, you’ll unlock an additional wild symbol, the Queen of Hearts, a multiplier counter that increases with each win, and additional bonus spins (+1 free spin per scatter). It’s important to note that the multiplier is UNLIMITED. So, although the free spins round is quite hard to come by, the multiplier feature ensures crazy time!

Court of Hearts is an okay slot. The bonus game is just a little hard to come by. Probably my main peeve about this game. If the base game gets stretched out too long it’s not fun at all. But when the scatters do hit, results are superb. Just watch my insane reaction when I scooped up the absolutely KLEEN satchel of $112,000.