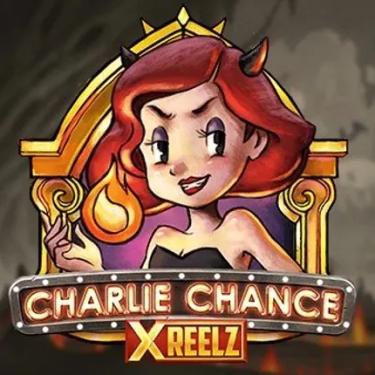 When signing anything, always watch out for the fine print. Blinded by the tempting offer of enormous fortune presented by the strange beautiful women, the protagonist of Charlie Chance xReelz slot forgot this advice. Now he finds himself trying to escape from Hell and has nobody to blame but himself.

It’s a backstory familiar to all fans of Play'n Go slots since it’s already seen in the game Charlie Chance in Hell To Pay. A year after its release, the provider decided to make a remake of this interesting-looking title. While the visuals have gone through slight changes, the gameplay is unrecognizable and offers a completely different playing experience.

Compared to the original, the remake brings an expanded 5x3 grid and an increased level of volatility to very high, while the RTP is at 96.25%. Another thing that’s bigger is the maximum win - players will certainly be pleased with winning potential being raised from the symbolic 6,666x the bet to the whooping up to 20,000x the stake. Wagering starts from €0.10 and goes all the way to €100, enabling a wide betting range suitable for everyone’s pocket.

The poor Charlie roasting in the fiery pits is the highest regular symbol, paying 20x the bet for 5 of a kind. Two violet devils, bells and three sixes produce medium payouts, while card suits depict the symbols with the lowest values.

As you can guess by the name, the xReelz feature is the star of the slot that activates when a Wild symbol participates in a winning combination. In such a case, the multiplier reel appears above reels and spins, creating a possibility for a 2x,3x, or 5x multiplier to fall randomly on the reel.

A devilish redhead woman with a Betty Boop vibe is Charlie’s tormentor and a Scatter symbol. Two Scatters are more than enough to get a respin, with reels holding them staying put while the others spin.

On the other hand, three or more Scatters trigger the Free Spins combined with xReelz feature on every spin. Also, Wilds that fall during the feature remain permanently on reels until the end of the bonus round, changing positions on each free spin.

Depending on the number of Scatters, one of the following three free spins modes activates:  ​

I really don’t care much about this slot. Considering the gameplay, it seems like the possibility of hitting the max prize of up to 20,000x the bet is just wishful thinking. The base game is quite boring and repetitive, with all action put on the bonus round.

And here’s the problem - it can take a lot of dead spins to activate free spins, in the end costing more than it’s worth. It’s a waste of money, time and nerves. That’s why the Charlie Chance xReelz slot is a total Brian in my book.