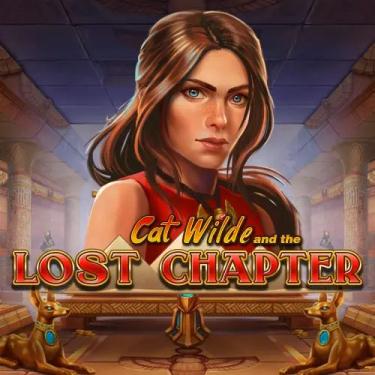 Cat Wilde and The Lost Chapter

Famed adventurer Cat Wilde is back and ready for another exhilarating quest in another ‘book of’ type of slot by Play’N Go. Cat Wilde and the Lost Chapter is made for players who are looking for adventure and who want to end their travel with treasure in their hands. However, if you decide to join Miss Wilde, beware of dangerous mythical forces resigning in ancient pyramids!

Visually, Cat Wilde and the Lost Chapter looks awfully similar, if not identical, to Cat Wilde and the Doom of Dead. There is the usual interior of a pyramid, the hieroglyphics and Egyptian symbols. The volatility level is rated 10/10 and the RTP is 96,2%, while the paylines are adjustable from 1 to 10.

The symbols here include scarabs, statue of Anubis, and Cat herself as the highest-paying symbol, rewarding 1,000x the bet for a full line. Even the lowest premium symbol can net you a decent 75x for a five-of-a-kind. The only feature in the base game is the wild symbol which replaces everything bar a scatter.

The scatters come in the shape of pyramids, and landing 3+ grants players 8 free spins. During the bonus round, a different symbol will become special expanding symbols on each free spin. Not only does the special expanding symbol cover the whole reel, it also doesn't have to be adjacent with another to create a win. An additional feature is that the scatter symbol now can transform into pyramid wild scatter.

Continuing the tradition of many 'Book of' slots, Cat Wilde and the Lost Chapter has the Pyramid Spins, unlocked after players land 2 or more scatters during the free spins feature. During Pyramid Spins, every new scatter collected will give players one more free spin.

If you're a hardcore fan of the 'Book of' slot series, it won't be hard to overlook the lack of originality in Cat Wilde and the Lost Chapter. After all, what we have here is a very enjoyable gaming experience. The expanding symbol still holds up as one of the most satisfying features in online slot games.

If there is one missed opportunity here, it's the lack of storyline continuity. Having a series with so many parts is a rare phenomenon in slots, yet Play 'N Go didn't take the chance to craft a more cinematic experience. A few cutscenes here and there could really elevate the slot and add coherence into the series as a whole.