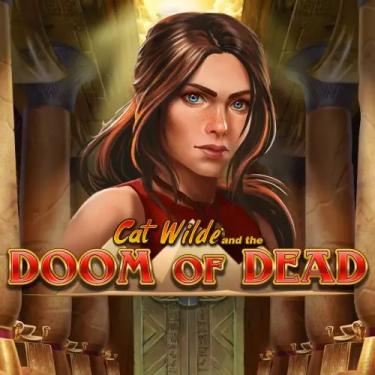 Cat Wilde and The Doom of The Dead

When Play N Go first created Rich Wilde and The Book of Dead in 2016, the slot quickly gathered a mass following and became quite a classic, so much so that many sequels have come out in the following years. One such sequel is Cat Wilde and The Doom of Dead, and this time, it is Rich's daughter Cat that will continue the legacy.

Similar to many slots in the 'Book of' series, Cat Wilde and The Doom of Dead doesn't overcomplicate things with its base game. The only special feature is the expanding wild, which display an Egyptian god and expand to cover the whole reel whenever they land. Hitting 5 expanding wilds will also generate quite a decent win of x100 the bet.

The scatter symbol is a compass, guiding players to the free spins feature when they collect 3 of them. The round begins with 10 free spins and you get to spin a wheel to get a random special expanding symbol. Then, all the expanding symbols that land will cover the reels and they also don't follow the normal paylines: this means that you can land the symbols on reel 1 and 4 and they will still payout as if they are adjacent to each other. Players will be glad to know also that free spins bonus can be retriggered without any limit.

Cat Wilde and The Doom of Dead slot, when compared with other titles in the 'Book of' series, doesn't exactly stand out. As a matter of fact, it sort of blends in with online slot games like Cat Wilde and The Lost Chapter or the original Book of Dead. However, being a release in this classic series, it still holds itself to a standard that not all slots can reach.

The Ancient Egypt visuals are to be expected but pleasant nonetheless. Moreover, there are some really sophisticated touches to the graphics such as the fact that expanding wilds have up to 5 different illustrations. Regarding the gameplay, the slot is simple yet effective. Because you can land expanding symbols anywhere on the reel and still win, the free spins round almost never leaves you dried after it's done.