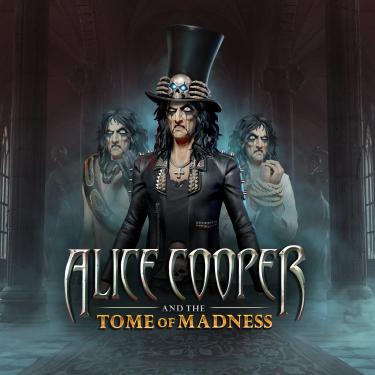 Alice Cooper and The Tome of Madness

Get your groove on, it’s time for rock and roll! Well, at least you might think that since the frontman of the legendary band is the main protagonist of the Alice Cooper and The Tome of Madness slot.

But instead of a music tour or a raging concert, prepare for Cooper’s worst nightmare. A dark and creepy atmosphere causes goosebumps, while the ominous soundtrack sends chills down the spine. Fans of the horror genre are up for a real treat, but this is certainly not the slot for the weakhearted.

This is one of those games that have an elaborate backstory. After being dragged into the eerie book of madness, The Godfather of Shock Rock finds himself in a parallel dimension composed of a 5x5 grid with cluster pays followed by cascading mechanics.

Playable from $0.10 to $100 per spin, the release has a decent RTP of 96.2% and a maximum winning potential of up to 3,000x the stake. Considering how hardcore-looking the slot is, the volatility is a bit softer than expected, but still high, rated as 7 out of 10 on Play'n GO's chart.

One of the following Reality Effects modifiers can be triggered randomly on any non-winning spin:​

Right from the grid, you can see Alice Cooper confined in heavy metal chains with three locks. That’s how many golden key symbols you should collect in one spin to set him free.

Once on the loose, the scenery changes to a concert stage, with the singer taking the central place on reels 2, 3, or 4 as a Mega Wild. In its full size, the Mega Wild walks left or right between cascades before walking off the reels.

Opposite of tied protagonist is the Hat of Madness with a meter charged by winning clusters. Certain special features get triggered corresponding to the number of collected symbols:​

When Reality Spins are triggered, they begin with one Reality Effect feature chosen by the player. Any feature you select is present during all free spins, while there’s also a chance to activate Mega Wild by collecting 3 keys and unchanging the singer.

Tome of Madness series has been good to me in the past, although the max winning potential of up to 3,000 x the bet could be higher. Still, the Play'n GO has paired it with a peculiar backstory of a strange journal that conjures up stories of other Alice Coopers in different dimensions, making him a prisoner of its own writing.

Alice Cooper and The Tome of Madness slot is dark and a bit disturbing, which makes it original and interesting. I’m sure there are some horror lovers in my troops, and this might be a release right up their alley.